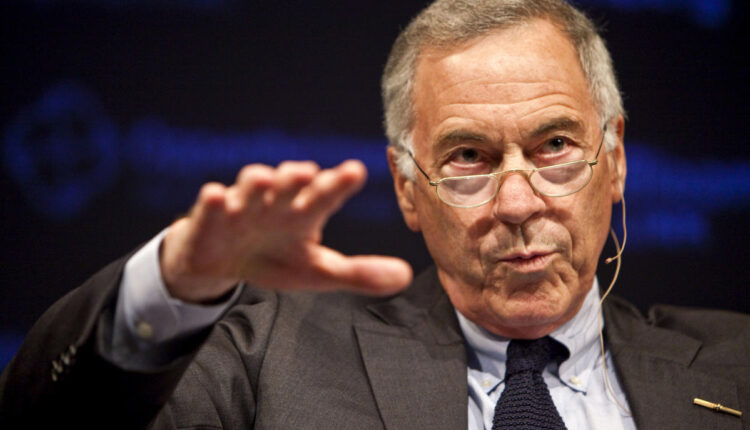 Crypto companies are spending “hundreds of millions of dollars” on lobbyists in Washington in an attempt to rig favourable terms with regulators, according to leading economist Steve Hanke.

In an exclusive interview with Yahoo Finance, Hanke said lobbyists are “talking and lobbying with hundreds of millions of dollars in Washington DC” in an effort to dictate favourable regulatory terms.

The crypto firms involved, such as Fidelity, Square and Coinbase, have created a new trade association called the Crypto Council for Innovation, to promote the promises of cryptocurrencies.

Washington has yet to agree upon a comprehensive regulatory framework for stablecoins and cryptocurrencies. It is in this vacuum of indecision that crypto-lobbyists are ramping up their efforts, Hanke said.

The burgeoning cryptocurrency market, which is little over a decade old, is now worth more than $3tn (£2tn).

Regulating this expanding sector is proving a headache as multiple definitions may be needed for each indexed listing depending on its use case. Some cryptocurrencies may be classified as currencies (many economists and experts object to this preferring to define them as tokens), but for others it may be more appropriate to define their status as digital assets.

The multiple functionality of the ethereum (ETH-USD) blockchain is much harder to categorise than the singular use case of bitcoin (BTC-USD), which acts more as a store of value than a currency for day-to-day transactions.

The lack of clarity in defining digital assets and slowness in understanding the applications of blockchain technology has resulted in delays in setting up a robust regulatory framework that would give US federal agencies authority over the sector.

“Considering all the banking and securities regulations already exist, if something walks like a duck, quacks like a duck, then it should be regulated like a duck,” said Hanke, a former senior economist with the Reagan administration.

Read more: How El Salvador’s bitcoin adoption could empty it of its US dollar reserves

Hanke’s call for immediate regulation of the cryptocurrency sector has been echoed by Brian Brooks, CEO of bitcoin-mining company Bitfury. Brooks was asked for his opinion on cryptocurrency regulation at a Congressional hearing on 8 December. The former lawyer replied: “We already have a regulatory system, so let’s use it.” He added that regulators are hesitant about defining a framework to deal with the sector because, “there is something about crypto that scares people, maybe it is just because it is new”.

There is an interesting pattern of association arising between officials in government and cryptocurrency firms. Brooks stepped down from his regulatory position as US Acting Comptroller of the Currency and joined Bitfury as CEO.

Hanke sees a pattern of US government officials leapfrogging to new lucrative positions in the crypto-ecosystem. “Everyone in high office that is close to securities banking is going through a revolving door and landing very plum jobs within the crypto ecosystem.”

In the past year Brian Quintenz, formerly of the Commodities Futures Trading Commission, joined venture-capital firm and investor in crypto-start-ups, Andreessen Horowitz. In August Jay Clayton, formerly head of the Securities and Exchange Commission, took on a position as an adviser with Fireblocks, a multi-billion dollar crypto custodian firm. And, in the UK, former chancellor of the exchequer Philip Hammond has now joined crypto-assets firm Copper.

Hanke said the “massive lobbying power” from crypto-lobbyists in Washington is financed by the major centralised cryptocurrency exchanges and blockchain companies that will usher in the disruptive changes promised by Web 3.0.

“Crypto lobbyists want to disintermediate the banks, they want to eliminate them, so the best way to do that is have the banks regulated in one way and the digital banks regulated in another,” added Hanke, who is also the co-director of Johns Hopkins University’s Institute for Applied Economics.

“Crypto-firms are pushing for special kinds of regulations, they want to rig the casino.”

Hanke, however, emphasised one major difference being that casinos don’t advertise that “you’ll automatically be a big winner if you roll the dice”.

“If that were the case they’d end up in jail.”

In contrast he described cryptocurrency developers as promoting their wares to unrealistic degrees, with the suggestion that if a consumer buys in “they’ll save their purchasing power forever”. The ability to flaunt their products unchecked is because the market is largely unregulated.

In early December, SEC chairman Gary Gensler’s called for cryptocurrency platform leaders to “talk to the SEC” amid the increasing fraudulent activity in the space. Gensler made a speech at the Investor Advisory Committee that was noted for his concerns about the crypto market having significant gaps in investor protection.

Cryptocurrency companies are getting anxious about a possible onslaught of crippling restrictions from US regulators. One of the largest companies, the FTX derivatives exchange, has preempted a possible regulatory crackdown with the announcement of a series of 10 principles to guide regulators when creating the inevitable framework that is coming.

Speaking to Yahoo Finance about the SEC announcement to crypto-firms, Gunnar Jaerv, co-founder of First Digital Trust (FDT), said: “Gensler’s call for crypto platforms to ‘come talk to the SEC’ and discuss regulations is in the right direction and while it is great that regulators and crypto companies can openly have these conversations, it’s important to note that most of the current regulatory frameworks are vague.

Read more: Do bitcoin charts foretell an impending crash in 2022?

“The lack of consistent regulation harms innovation in the space, paralysing companies as the rules change and FTX’s Key Principles highlight the need for greater consistency, to help companies have better clarity, and nations access opportunities for greater economic growth.”

If the US regulators strap draconian measures on the burgeoning cryptocurrency sector, it could drive innovation elsewhere across the globe where frameworks are more lenient and beneficial to business. This is backed by US Republican Representative Patrick T McHenry of North Carolina who spoke against hasty and strict regulations at the recent Congressional hearing.

Watch: How to solve the problem of inflation

Three Easy Pieces: How to Teach Your Grandmother Bitcoin