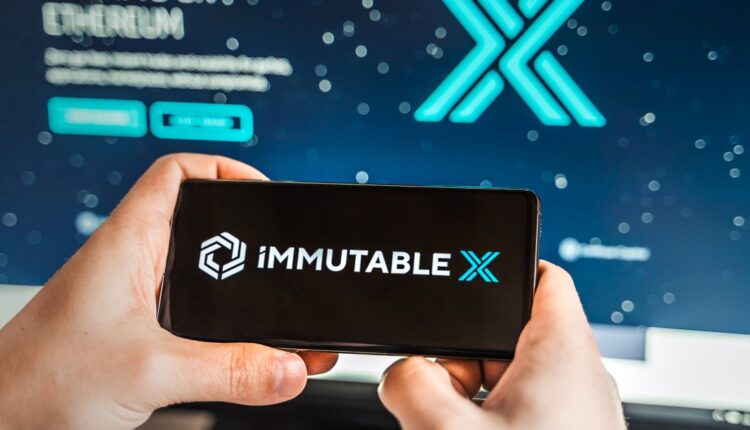 Immutable X, an Ethereum-based non-fungible token (NFT) scaling platform, launched its IMX token last month. The IMX/USD price has been volatile in the six weeks since its launch, peaking in late November before sliding back into December. The price has edged higher in recent days but remains below its launch price.

What is Immutable X? In this article we look at the protocol and how the new Immutable X cryptocurrency works, and analyse early predictions for the coin’s future price trend.

Immutable was founded by entrepreneur James Ferguson, who previously led a software development team at a large ecommerce provider, and his brother Robbie Ferguson, also an entrepreneur. The company raised $15m in a Series A financing round in September 2019 to accelerate development of its flagship trading card game, Gods Unchained. The round was led by technology investment company Naspers Ventures and the Galaxy Digital EOS VC Fund run by Galaxy Digital, a blockchain-focused merchant bank. Apex Capital Partners also participated.

“Currently, trading on the Ethereum network is broken,” Immutable’s developer guide states. “The network currently supports approximately 150,000 non-fungible token transactions per day at 30% network usage. Trades can fail on occasion, returning assets to owners instead of trading, and the time they take to process is inconsistent, sometimes taking upwards of an hour. This is not only annoying for users who are attempting to trade, it can also cause problems for developers building on the network.

“Additionally, developers are unable to mint NFTs sustainably, making it impossible for projects to properly fundraise to continue expansion and create more content for their users. Our plan is for Immutable X to support more than 200 million trades per day while consuming less than 30% of Ethereum’s capacity.”

Immutable X aims to provide “instant trading, massive scalability and zero gas fees for minting and trading, all without compromising user or asset security,” according to the project’s whitepaper.

Immutable X features a ZK-rollup scaling engine to increase scalability on the Ethereum blockchain, while maintaining its underlying security. Rollups batch “large numbers of transactions, generating a ‘validity proof’ for those transactions, and then submitting that proof to an L1 smart contract,” the whitepaper notes, adding: “In the words of Ethereum co-founder Vitalik Buterin, ‘the Ethereum ecosystem is likely to be all-in one rollups as a scaling strategy for the near and mid-term future’.”

Immutable X announced its ERC-20 token IMX in July and introduced a play-to-earn campaign for players of its Gods Unchained game to receive a share of 10m IMX tokens distributed as retrospective stage rewards and another 40m distributed as alpha stage rewards ahead of the November launch.

The IMX token is designed to accelerate the growth of Immutable X by rewarding users for adopting the protocol and trading, contributing to building an NFT ecosystem on the platform.

A user earns points each time they perform an action that benefits Immutable X. A rewards pool is distributed proportionately based on the number of points a user holds.

Cryptocurrency exchange Kucoin announced it would start listing the token from 29 November.

What do the latest predictions indicate for the IMX price in the months and years ahead?

Immutable X (IMX) price prediction: is the token a buy or sell?

Immutable X technical analysis from CoinCodex was bearish at the time of writing (23 December) with the price around $4.32, with one indicator showing bullish signals and 14 ‘sell’ signals.

Gov Capital predicted that the IMX token price could collapse to zero by September 2022, declining from $5.312 at the start of the year.

It’s important to keep in mind that cryptocurrency markets remain extremely volatile, making it difficult to accurately predict what a coin’s price will be in a few hours, and even harder to give long-term estimates. As such, analysts and algorithm-based forecasters can and do get their predictions wrong.

We recommend that you always do your own research, follow the latest Immutable X crypto news and consider the latest market trends, technical and fundamental analysis, and expert opinion before making any investment decision. Keep in mind that past performance is no guarantee of future returns. And never invest more than you can afford to lose.

Ready to get started?

The difference between trading assets and CFDs
The main difference between CFD trading and trading assets, such as commodities and stocks, is that you don’t own the underlying asset when you trade on a CFD.
You can still benefit if the market moves in your favour, or make a loss if it moves against you. However, with traditional trading you enter a contract to exchange the legal ownership of the individual shares or the commodities for money, and you own this until you sell it again.
CFDs are leveraged products, which means that you only need to deposit a percentage of the full value of the CFD trade in order to open a position. But with traditional trading, you buy the assets for the full amount. In the UK, there is no stamp duty on CFD trading, but there is when you buy stocks, for example.
CFDs attract overnight costs to hold the trades (unless you use 1-1 leverage), which makes them more suited to short-term trading opportunities. Stocks and commodities are more normally bought and held for longer. You might also pay a broker commission or fees when buying and selling assets direct and you’d need somewhere to store them safely.

US lawmaker planning to introduce comprehensive crypto bill in 2022: report