Most popular crypto myths put to rest by OctaFX 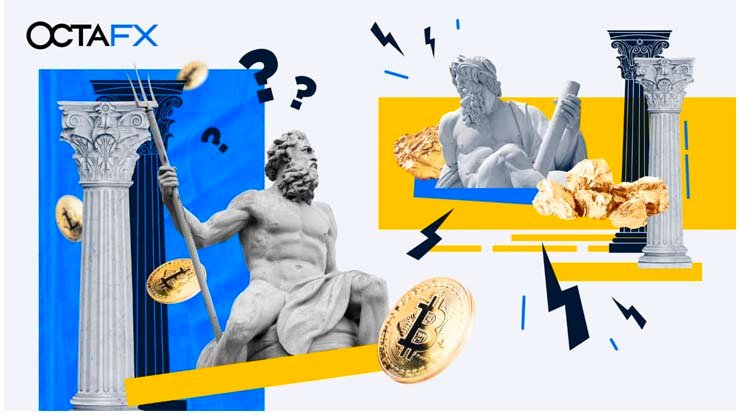 Some crypto myths need swift dismantling since they paint an unnecessarily vague and even plainly wrong picture of this emerging industry. In the course of serious adoption by more and more legacy financial institutions and rising retail influx, one might suspect most myths are gone with the wind. Not yet—but soon, promises international Forex broker OctaFX.

Bitcoin pumped the vertical line towards 68,700 USD on 10 November 2021, closing that day with a new all-time high. The entire following month was a tour-de-force involving the price moving down to almost 46,500 USD on 4 December—a correction of over 32 per cent, taking the altcoin market down with it. Still, a bear sentiment has not yet been announced, and most industry observers rather see the peculiarities of a broader bull market unfolding, projecting its blockchain innovation on the entire financial market.

‘Bitcoin has no intrinsic value’

Although this prejudice holds up much less than a few years ago, many critics, like prominent gold maximalists, classical stock traders, and lovers of centralised fiat currency, don’t pass on any opportunity to spread the same unproven claim of bitcoin having ‘no intrinsic value.’ It became some sort of a hybrid between a never fulfilled prophecy, a running joke, and a mantra for justifying one’s own dismissiveness. Most of these complaints revolve around the supposed ‘double spending’ problem of the bitcoin network, which no one has ever demonstrated. After more than a decade of active, exponential growth and adoption of bitcoin and its ecosystem, powered by a worldwide community of developers, miners, traders, and holders (or more accurately, ‘hodlers’), doubters have been proven wrong time and time again.

‘Can I lose money in crypto?’

Naturally. Like losing money on the stock market or buying a low-quality car, you can always find ways to lose funds in no time by trusting dubious sources. Perseverance, attentiveness, and caution can be remedies in those instances of higher financial risk and reward.

Thus even though bitcoin and blockchain are not, in essence, Ponzi schemes, there are undoubtedly individual projects that tarnish the good name of crypto. They act maliciously, promising partnerships that never were or launching tokens that have nothing behind them. These unfortunate events that lead to people losing money feed the rumours associating bitcoin with ‘a pyramid scheme. This notion has been debunked for some time, but only after a wide bitcoin adoption by more and more states, governments, private banks, and celebrities is it now considered a legitimate, uncorrupted store of value in the coming ‘Fourth Industrial Revolution.’ Do your due diligence and research the companies where you put in your hard-earned money. Therefore it bears repeating, even at the risk of sounding dull: the wholesale solution to this phenomenon—minimising your risks—was and always will be education.

‘Not your keys—not your crypto’

That is true. If you hold your crypto assets on centralised crypto exchanges (like Binance, KuCoin, Huobi), your capital is not entirely under your control and is vulnerable to an attack. Although in the last years these exchanges became household names precisely for their persistent approach towards security and stability of services, hacks are still happening at present. It is generally recommended to leave only the funds you need on centralised exchanges. Everything you hold mid- to long-term, you should store on an individual wallet app—with separate keys for maximum security.

In decentralised finances (DeFi), your independence comes with total responsibility. If you make a basic mistake and lose your funds because of it, it will be on you. There are cases when this responsibility splits. If the services you used acknowledge a shared or total fault, then you have a chance of being reimbursed for your loss, either wholly or at least partially. Although these instances are rather rare.

‘You never know what to expect with crypto’

That’s not entirely true and depends, again, on your knowledgeability. It certainly doesn’t have to be as obscure as ‘an unopened box of chocolates’. For this reason, doing fundamental analysis (FA) can go a long way. Thorough research will give you a very reliable idea of where the project might be going. Who comprises the blockchain project’s team in question? Who are the early investors, and what are their track records? What are the unique use cases the project promises to deliver? Are there patents involved for certain niche technologies within the blockchain? When you get the answers to these FA-related questions, you’ll have an immeasurably better chance to make an informed, lasting, and lucrative investment decision.

Most of us do not know what to expect from the bitcoin creator, either. This elusive personality named ‘Satoshi Nakamoto’ allegedly withdrew from the project not long after its inception in 2008. This still raises many eyebrows, although the inventors of the wheel or e-mail have no ongoing impact on their creations, either. So, Satoshi or not, for less than 15 years, we have seen the rise of this technology from a plaything of some brainiacs to an almost universally accepted (yet extremely volatile) world currency worth over 50,000 USD.

Every market has cycles, up- and downtrends. If the blockchain market initiates a bearish trend, traders and investors should adapt accordingly and sideline their emotions. This industry is still in its infancy compared to what’s to come. So there should be no wonder the market fluctuates much more than the older, more established financial processes around gold, Brent oil, or even Forex.

Please note, this article is by no means an exhaustive list of all the myths concerning the crypto market. But it can serve as an initial roadmap to navigate through the ever-so-alluring world of decentralised finance.

OctaFX is a global broker that provides online trading services worldwide since 2011. It offers a state-of-the-art trading experience to over 6.6 million trading accounts worldwide. The broker’s educational and news content is steadily growing with expert articles on all things finance. OctaFX has won more than 30 awards since its foundation, including the Best ECN Broker 2020 award from World Finance and more recently the 2021 ‘Best Forex Broker Asia’ award and the 2020 ‘Most Transparent Broker’ award from Global Banking & Finance Review and Forex Awards, respectively. The company is well-known for its social and charity activity.