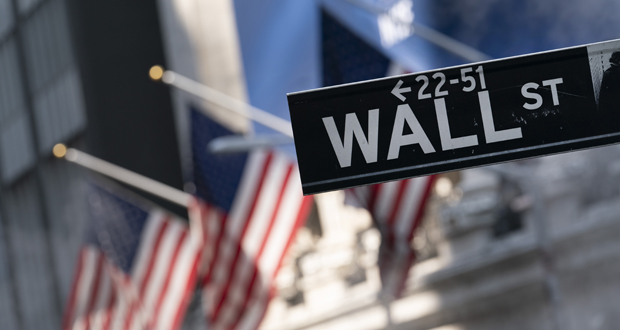 A sign for Wall Street hangs in front of the New York Stock Exchange on July 8.
(AP file photo/Mark Lennihan)

Wall Street delivered another strong year for investors in 2021, as a resurgence in consumer demand fueled by the reopening of the global economy pumped up corporate profits.

The market weathered a number of challenges along the way. Skyrocketing inflation, worldwide supply-chain disruptions and a global economy still vulnerable to the uncertainty created by the COVID-19 pandemic fueled market volatility, especially toward the end of the year.

Wall Street got a boost from the Federal Reserve, which kept its key short-term interest rate near zero all year. That helped keep borrowing costs for companies low and stock valuations high. However, investors expect the Fed to start pushing rates higher in 2022.

Inflation awoke from a long slumber in 2021. The U.S. government’s consumer price index skyrocketed 6.8% in the 12 months that ended in November – the sharpest such jump since 1982. Wholesale prices rose even more. Many companies have raised prices to offset higher input costs and keep profit margins steady. Consumers are paying more for everything from diapers and detergent to cereal and household appliances. It’s unclear exactly when the supply bottlenecks will ease, so further price increases could be in store for 2022.

Small investors piled into stocks in 2021, at times banding together on online forums like Reddit’s WallStreetBets to stoke a frenzy over certain companies like GameStop. The financially struggling video-game retailer surged more than 1,600% in January. The mania led to big losses for some hedge funds, multiple halts in trading and congressional hearings asking who was getting hurt. The rise of small investors is one reason stocks represented a quarter of household assets as of the third quarter, up from only 13% a decade ago, according to Wells Fargo Securities.

Bond prices fell and, in turn, their yields rose in 2021, but not as much as one might expect with the economy growing and inflation jumping. Still, yields remain low relative to history. The yield on the 10-year Treasury, for example, is still below where it was in the spring. That could be a product of expectations for inflation to eventually fall and for the economy to moderate its growth too. Low bond yields have been one of the main reasons that stock prices have surged so high: With bonds paying so little, there’s a widespread belief on Wall Street that there is no alternative to buying stocks.

Electric vehicle sales nearly doubled worldwide as automakers rolled out new models. Many consumers bought EVs to avoid burning oil, but others went for the quick acceleration and crisp handling. Shares of Tesla, the world’s EV leader, jumped were up than 40% as of Dec. 22. The industry’s old guard revved up its commitment to EVs – for example, General Motors plans a GMC Hummer EV. Although EVs will only be 5.8% of global new-vehicle sales in 2021, that figure could grow close to 15% in 2025, says research firm LMC Automotive.

A global chip shortage had repercussions across much of the economy in 2021, thwarting consumers who faced delays in getting new cars, video-game consoles and an array of other products. The shortage had its origins in the outbreak of the COVID-19 pandemic, starting with the lockdowns shuttering Asian semiconductor factories in early 2020. As 2022 approaches, some analysts are now worried about what happens when the shortages ease and an oversupply of chips affects prices.

Cryptocurrency prices went on another roller coaster this past year: surging, plunging and then cycling again. What made 2021 different was how many more people experienced those swings, as crypto crossed into the mainstream. In the most famous example, El Salvador became the first country to make Bitcoin legal tender. Perhaps more impactful for financial markets, the first exchange-traded fund tied to Bitcoin futures also began to trade.

Initial public offerings exploded in 2021 as companies sought to take advantage of a soaring stock market. There were 389 IPOs through the first week of December, easily surpassing the total of 221 for all of 2020, according to Renaissance Capital. Among the more notable IPOs were online broker Robinhood, dating app Bumble and electric vehicle maker Rivian Automotive. It was also a blowout year for special-purpose acquisition companies, or SPACs, which raise money from public investors with the intent of buying a private company later. However, SPACs have been facing tougher scrutiny from regulators.

Rising prices for oil and natural gas unsettled the global economic recovery in 2021. The biggest crunch came in Europe, where by December natural gas prices had soared more than nine times their level at the start of the year amid fears that reserves would run out in a colder than average winter. President Joe Biden tried pressuring OPEC to boost production and tapping his country’s emergency stockpiles of oil in an effort to lower gasoline prices for U.S. drivers. Oil and gasoline prices did fall, but mostly due to fears of another possible economic slowdown from the ongoing coronavirus pandemic.

Reality and the metaverse

The debate over social media’s impact on the public exploded when Facebook whistleblower Frances Haugen leaked tens of thousands of damning internal documents about the harm the company is causing to its users around the world. Amid the fallout, Facebook rebranded itself Meta Platforms, reflecting its commitment to developing the metaverse. CEO Mark Zuckerberg described the metaverse as a “virtual environment” you can go inside of – instead of just looking at on a screen. Meta’s stock price and revenue have so far withstood the turmoil.