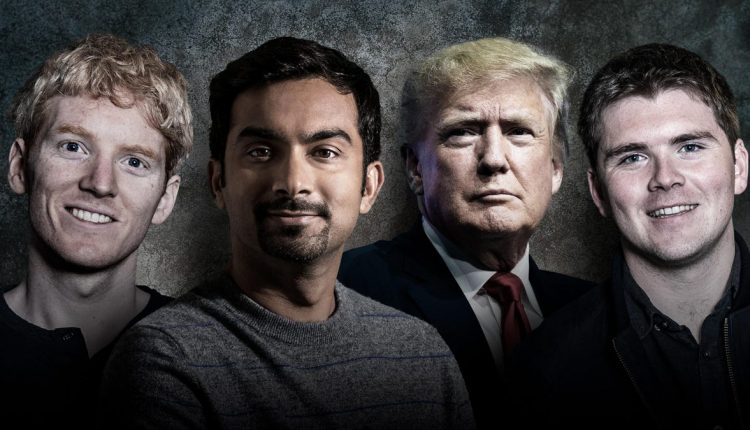 A “unicorn phenomenon” that’s ushered in massive fundraising rounds for startups over the past decade is “finally blowing up” and manifesting itself in a record wave of IPO activity, says Pitchbook venture analyst Cameron Stanfill. Thanks in part to trillions of venture-capital dollars spent on startups over the past decade, he says the trend of buzzy billion-dollar firms nabbing sky-high public market valuations isn’t likely to cool down in 2022.

Now, private equity giant TPG, food delivery service Instacart and meme-stock purveyor Reddit are among firms preparing for 2022 public debuts. Stanfill expects the number of deals could possibly hit a new high in 2022, but he’s not so sure about an increase in deal value. “That’s harder to predict,” he explains, citing the uncertainty around “outlier-style” megadeals, like those pulled off by Coinbase and Gen-Z gaming platform Roblox, which opted for a direct listing in March after delaying a trading debut in 2020 amid concerns of exuberant post-IPO price spikes. If it finally goes public, payments giant Stripe—the country’s most valuable startup, worth nearly $100 billion—could help mint a new IPO record.

As for performance? “IPOs can be as enticing as a lottery ticket,” says Ally Invest Chief Markets Strategist, Lindsey Bell, “but it’s difficult to tell which will be booms or busts.” Despite the “excitement and hype” around many public listings, Bell warns new stocks often pose a higher risk than those with longer tenure. Coinbase, for example, spiked as much as 75% on the firm’s first day of trading in April, shortly after retail trading’s unprecedented surge in the first quarter. However, shares have since crashed more than 45% and hit new record lows, as the retail fervor—and bubbly crypto prices—cooled off.

Despite the explosion of firms going public, half of the companies that listed on U.S. exchanges between 2015 and 2019 were trading below their IPO prices one year later, notes Ally Invest’s Lindsey Bell.

The Renaissance IPO ETF, which has some $700 million in assets and touts ownership of the “largest, most liquid, newly listed” U.S. IPOs, skyrocketed 107% in 2020 but plummeted about 9.5% in 2021. Compare that with gains of 27% and 23% for the S&P 500 and tech-heavy Nasdaq, respectively. “This isn’t a new trend,” says Bell of the poor post-IPO performance, noting half of U.S. companies that went public between 2015 and 2019 were trading below their IPO prices one year later.

Meanwhile, stock-market volatility jumped to an 11-month high in December after the Federal Reserve announced plans to hike interest rates three times this year and completely phase out its pandemic-era bond purchases by March in response to decades-high inflation, pulling the S&P down nearly 4% from a record close just days earlier. Higher interest rates, which tend to hurt public company earnings and stock prices, are “top of mind,” says Stanfill, expecting more volatility that could ultimately delay some IPO plans or even discourage others altogether in the shorter term.

Despite the growing risks, there are still a large number of special-purpose acquisition companies actively searching for deals and likely to provide a big IPO tailwind, Stanfill notes. About 575 SPACs are currently sitting on roughly $155 billion raised for private companies eager to list on a U.S. exchange—already rivaling the record 606 SPACs that took companies public last year. (Forbes Media announced in August it would go public via SPAC this year.) Though the Securities and Exchange Commission is teasing harsher disclosure requirements for these time-saving, go-public vehicles, the sheer volume of available funds—and the potential for SPAC sponsor returns—are likely enough to bolster the IPO market despite lingering uncertainty, especially since most companies have no more than two years to strike a deal or return cash.

The IPO market is bracing for yet another massive year but it’s unclear whether it will result in a boom or bust. Here are the companies to watch ahead of their 2022 IPOs.

San Francisco digital bank Chime is in talks to go public at a valuation of $35 billion to $45 billion as soon as March, a person familiar with the matter told Forbes in October. The firm has yet to make the plans official, but the timing makes sense: CEO, Chris Britt said in September 2020 Chime would become “IPO-ready” within one year. “I probably get calls from two SPACs a week to see if we’re interested in getting into the markets quickly,” he said at the time.

Though the online chat service has yet to make an official announcement, investors have been eyeing a Discord IPO since the company ended talks with Microsoft in April to be acquired for at least $10 billion. “We did receive a lot of offers,” CEO and cofounder, Jason Citron, who sold a gaming startup for $104 million in 2011, told CNBC the following month. Citron called it a “tremendous opportunity” for the firm and its roughly 150 million active users but didn’t announce specific exit plans.

Founder and CEO Pat Brown said in November an IPO was “inevitable” for the vegan-friendly food company, but he stopped short of giving a clear timeline. Reports indicate Impossible, which has raised about $1.5 billion since its founding in 2011, is eyeing a $10 billion valuation—signaling real competition for fellow fake-meat-maker Beyond, which listed on the Nasdaq in 2019 and is worth about $5 billion.

The grocery delivery service was originally hoping to dive into public markets at the end of 2021, but new CEO Fidji Simo delayed the plans until this year to help broaden services beyond simple food delivery. The market hasn’t been too kind to competitor DoorDash, whose shares have plunged about 15% since their first day of trading in December 2020, but eMarketer points out Instacart has a trick up its sleeve—a fast-growing advertising platform that retailers can tap to promote their products in search results.

On December 15, Reddit confidentially filed paperwork to go public this year, but disclosed no financial details and said it still hasn’t determined how much it’s looking to raise. Since a massive funding round in August, the 16-year-old social media juggernaut behind last year’s explosive memestock frenzy has reportedly been eyeing a $15 billion valuation. Though that’s steep compared to trading multiples for competitors like Facebook and Twitter, eager Redditors are already clamoring about making the platform itself the next meme stock.

For more than a year, the payments processor founded by billionaire brothers Patrick and John Collison has been teasing an IPO to rev up growth with fresh public-market cash. And though John told CNBC in August that Stripe is “very happy as a private company,” the PayPal competitor was reportedly talking to investment banks in September about a market debut this year. If founders decide to take the plunge, Stripe would easily become one of the largest IPOs to hit the market.

Assets Under Management: $109 billion as of December

Late last month, the private equity powerhouse founded by billionaires James Coulter and David Bonderman announced plans to list on the Nasdaq exchange. Though it’s keeping many details under wraps, the firm listed an offering size of $100 million, but suggested that could likely increase depending on investor interest. The company holds outsized stakes in talent agency CAA, Vice Media and Spotify. Its debut would breathe new life into private equity public listings after a massive boom in buyout deals.

Former President Donald Trump has dazzled investors after announcing plans in October to take his media company public via SPAC. Shares of the vehicle, Digital World Acquisition Corp, have skyrocketed about 400% since, and the firm has since revealed plans to cash in on the retail frenzy by raising about $1 billion from investors. However, regulators are already pouncing on the move, with the SEC initiating an investigation into stock trading and high-level communications last month. No one’s been accused of wrongdoing, but it’s unclear how this’ll affect Trump’s latest…

Read More: The Biggest IPOs To Watch In 2022