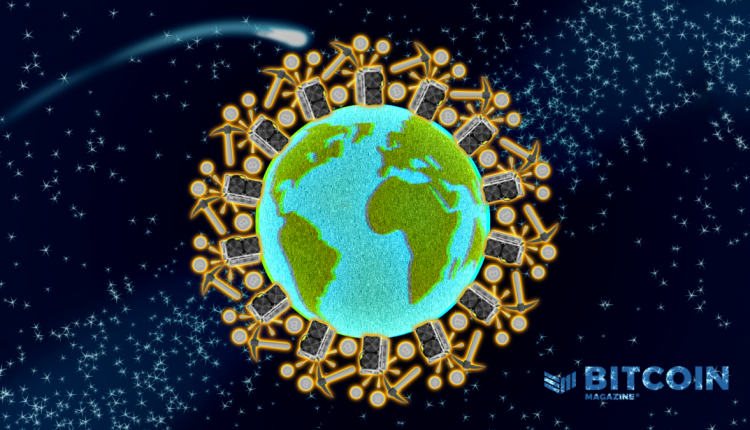 This piece is part of a series that interviews Bitcoin miners about their experiences setting up and scaling mining operations as well as their view on the direction of the mining world. If you are mining Bitcoin and want to share your knowledge and story — the ups, downs and innovations — reach out to me on Twitter @CaptainSiddH.

For this episode in our series, BigCohooNah joined us to share the knowledge gained from his own home mining forays and his work at Braiins and Slush Pool. As of December 2021, he joined the Compass Mining team to work on its at-home mining product and help with its mining operations. You can find BigCohooNah on Twitter: https://twitter.com/BigCohoo

How and why did you get into Bitcoin mining?

My first exposure to mining was when a friend of mine — an old roommate from college — bought an S9 in 2018. He got caught up in the hype of Bitcoin like everyone else did, but he fell down the mining portion of the rabbit hole. He paid a lot for that S9 — somewhere between $3,000 to $6,000. They live in Michigan, where the electricity rate is about $0.18 per kilowatt hour, so they were only able to run it for a little bit before they had to unplug it and just cut their losses.

I remembered that story while I was working at Ford. They sent me down to Kentucky for six months to support the Super Duty launch — the Ford F250s, 350s, etc. This is when I really started falling down the Bitcoin rabbit hole. I was all into crypto, but as I learned more and asked more questions I just started knocking off all the coins, so I sold everything and went all into bitcoin. I remembered that my friend had this miner, and since my place in Kentucky had free electricity, I asked my buddy if I could borrow that S9. So, sure enough, he let me borrow it and I set it up in my temporary place in Kentucky.

During that time in Kentucky away from my friends in Michigan I had very few distractions, so I played with Lightning, ran a node, just dove as deep as I could. I learned a lot about Bitcoin and mining during that time.

When I came back to Michigan, the S9 wasn’t profitable to run and was causing drama. Seeing the electricity bill then looking at the sats stacked — I’m a pretty frugal person. However, after the first run up in 2021 from the previous all-time high to around $30,000, I bought a Whatsminer M32 and ran that in a buddy’s garage for a while at Michigan electricity rates, eventually moving it to a warehouse where I now get commercial rates. We made a homebuilt version of Steve Barbour’s Black Box to run in that warehouse as well, and swapped out the M32 for an S19.

Outside of my personal endeavors into home mining, I also joined Braiins part-time to do marketing, content and support. In December, I started a new full-time role at Compass to help with their at-home and hosted mining.

Congratulations! I wanted to ask you about Compass, actually. Do you think hosted mining is worth it for someone who wants to get into mining?

I think it just depends on your risk tolerance. For a lot of people — maybe you and I — we live, breathe, eat and sleep Bitcoin — so if we’re hosting our miners, we’re probably getting in trouble with the Bitcoiners because we don’t own the hardware. We’re not plugging it in and doing our due diligence. But in reality, while running a machine is easy, it’s not fun to manage. They’re hot, they’re loud and they require unique electricity setups. For example, they require 220 volt plugs, but in the United States most household plugs are only 110 volts. Higher volt plugs are reserved for special appliances like electric dryers and ovens. So, to run a miner you’ll either have to unplug your dryer or wire up a 220 volt plug. You have to run like new circuits and make sure everything’s rated for 220 volts so you don’t burn your house down.

It’s important to understand the risks if you use a hosted product such as Compass — you’re trusting us to manage your miners, there may be delays, miners could go offline from time to time and there is hardware risk. If you are OK with these tradeoffs, then hosting makes perfect sense. It’s clearly proving to be something that people want. Compass is doing it in a way where you can actually mine with them and not dox yourself in any way, which is kind of cool. So, hosting versus home mining depends on how hands-on you want to get. I think the only people critical of the hosted mining version are the Bitcoiners that are going to yell at you for not hosting everything yourself.

Part of my responsibilities in my new role at Compass are to streamline the hosting process — reducing those risks and making it easier for new miners to get onboard.

Do you think hosted mining will last as a business model?

As for whether hosting will last as a business — I think so. You’ll likely remember all the cloud mining scams in 2017 and 2018 — I think Compass does it right in that you own the miner and they are hosting it on your behalf. You have miners tied to your name, so if you ever want those miners and you’re not locked into a contract, you can get physical delivery of that miner.

There’s a hole in the market right now, because a lot of people who would be home miners are getting burned by electricity rates, and that just puts a bad taste in your mouth for Bitcoin in general. Compass could have made a ton of money starting up their own farm, but instead they followed a broker model, matching capacity and hardware. They don’t own the capacity or the hardware, but they match it up and make it easy for anyone to get even just a few miners into a secure facility with low costs.

In your experience at Braiins, where do you see new miners stumbling the most?

There are a lot of people that are trying to get into mining without any guidance. Mainly, they very much don’t understand the electrical requirements. The level of heat and noise are often unexpected as well. In the worst cases I see people just don’t get how Bitcoin works — don’t understand how the difficulty works, or don’t understand how profitability directly impacts the price of the hardware. So, they just think they’re going to be making $50 a day forever.

The electrical requirements are probably the biggest issue — you can plug in an S19 and that’ll use more electricity than your entire house. No other appliance really exposes you to that. You normally pay someone to just install an outlet for your electric dryer or oven, and that’s the most you ever think about it — you just use your oven. Also, when you’re dealing with that much electricity, it gets a little spooky — especially because a lot of people want to do all this mining stuff by themselves and there are very few resources out there for people.

You mentioned hardware pricing as tied to profitability. What have you seen in the hardware market this year?

Efficiency adds a huge premium for the new units, however. A $500 S9 running at six cents per kilowatt hour will ROI in just nine months. An S19 that costs $12,000 today running at the same power rate will take 21 months to ROI — keeping price and difficulty constant, which of course could vary wildly. So, that increased efficiency and lifespan comes at a big premium.

Speaking of power costs, a couple of weeks ago you tweeted some thoughts on how miners can use power purchase agreements and business entities to get lower power rates. Can you talk through what you learned there?

This has been a fun one for me. My wife and I are building a house right now, and doing about half of the work ourselves — including all the electrical. While working on that, I just wanted to understand the electrical regulations and see how things were in my region. I dug up a lot of information that I’ve never seen anybody post about, and it has been really cool to share it and see people really enjoy that information and utilize it.

So, my power bill lists a kilowatt hour at $0.18, but when I went online I saw official sources listing the price as $0.12. I called the power company and asked them to explain the discrepancy. The difference ended up being due to delivery costs and other things not included in the $0.12 figure, but on that call I also discovered that there are other options — both residential and commercial — for purchasing power, many of which are far cheaper than $0.18 per kilowatt hour. The best option I found in Michigan was a commercial rate in a peak power-style power purchase agreement (PPA), which fits perfectly with a mining operation that is always on, pulling a constant load. So, I might be installing a separate box for that commercial power with the new house.

You mentioned natural gas — what have you found out about natural gas in Michigan as it relates to mining?