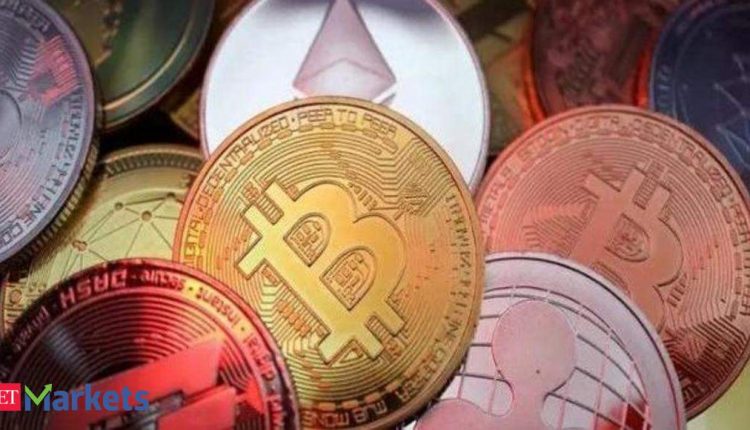 Jul 30, 2022
Mumbai: After a choppy week that saw major cryptocurrencies extend losses, the crypto market is consolidating with bulls and bears locked in a tug-of-war for a decisive direction amid the overhang of a hawkish US Federal Reserve and rising Covid-19 cases.

Globally, and in India too, exchanges are recording lower trading volumes as investors are playing a waiting game due to Covid-led uncertainty and unclear market signals.

Crypto experts say that the market may have stabilised after Wednesday’s sell-off as most popular digital coins such as Bitcoin, Ethereum, Binance Coin and Solano are now moving sideways with no major drops in the past 48 hours.

But experts are keeping an eye out for the most popular crypto currency. Bitcoin began 2021 at around $32,000 per coin and reached a record of $68,749 on November 11, but has since fallen into a slump.

Edul Patel, CEO of crypto investing platform Mudrex, said he expects Bitcoin to operate between $35,000 and $70,000.

“In terms of returns, if people had invested in early 2021, they would still be sitting on good returns. In the next 3-4 weeks, we will see a general direction in the market.”

Cryptocurrencies have been under pressure lately after key central banks indicated that the low-interest period may be coming to an end.

To add to the uncertainty, mining activity in Kazakhstan – a major Bitcoin mining hub – has been disrupted due to mass protests that have led to electricity and internet restrictions in the Central Asian country.

“The current dip in crypto prices is mainly driven by the global Covid-19 surge, which has resulted in uncertainty in the capital markets. Central banks around the world are also being put under pressure to neutralise inflation, which is putting pressure on the price of popular crypto assets,” said Jay Hao, CEO of OKEx.com, a global cryptocurrency exchange. “We can expect the crypto market to return to normalcy when there is more specific data around the impact of the recent Covid surge on the global financial markets.”

Surprisingly, a few coins have risen in value as investors begin to add new tokens to their portfolios.

During the day, alt coins like KNC, DASH and BICO were up by more than 10 per cent.

“The market is finding its levels,” said Vishal Gupta, a Noida-based crypto investor. “The institutes and whales have been buying even at these levels. The market will need solid news to move in one direction.”

Experts said the market outlook for the near future may remain choppy, as historically there have been dips in the period leading up to the Chinese New Year.

“This year may be different due to the Chinese government’s clampdown on crypto exchanges in the past months,” said Charles Tan of Coinstore, a Singapore-based cryptocurrency exchange. “It remains to be seen how much of an extent it will affect the crypto markets at large.”

PayPal Explores Launching its Own Cryptocurrency