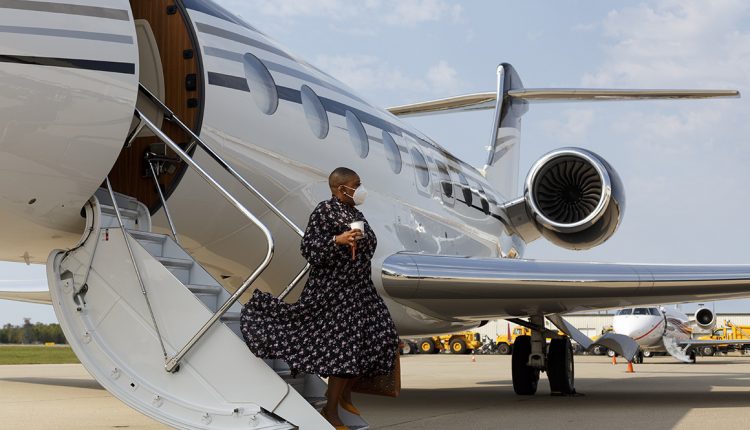 “GOLI SHEIKHOLESLAMI will be the new CEO of POLITICO Media Group. Her appointment comes after a vigorous national search in which we looked for a leader who will take POLITICO to the next level, examining dozens of profiles and candidates. We are positive that we have found exactly the right fit. With her vast experience and aspiration, Goli was by far our top choice for the role and we are thrilled to welcome her. She will begin in her new role in February.

“Goli has extensive and diverse media experience spanning documentary film, news, classifieds, digital media, radio/audio. In addition, she has a proven track record of further developing and transforming media business models. She will bring many qualities that will help take us to the next level: She is a strong leader, has led large organizations, and is experienced in hiring top talent. She has worked for Time Warner, Condé Nast, Washington Post (as GM Digital), Everyday Health, Chicago Public Radio and most recently as CEO at NY Public Radio. She serves on the Board of Patreon, the membership platform for artists and creators, and is a former Member of the Board of Directors of the National Public Radio (NPR).” Full statement

AT CNN+ — AUDIE CORNISH is joining CNN’s new streaming service as an anchor and correspondent. (Naturally, she will also have a new podcast.) She was previously the co-host of NPR’s “All Things Considered.” Announcement from CNN

Last week, CNN+ also announced that ALISON ROMAN, the cook and former NYT writer, will have a “brand new, highly opinionated and never finicky, cooking show” on the subscription service, which is scheduled to launch this spring. (As big fans of both Cornish’s run at ATC and Roman’s recipes, especially her caramelized shallot pasta, we’re pretty excited about these two announcements.)

— More CNN news: ADAM WOLLNER is joining the CNN politics team as editor for The Point with CHRIS CILLIZZA. He most recently was deputy editor in McClatchy’s Washington bureau, and is a National Journal alum.

AT MSNBC — SYMONE SANDERS, who recently left her position as a senior adviser to VP KAMALA HARRIS, is joining MSNBC to host a weekend program and a show on Peacock, NBC’s streaming service. More from Max Tani

AT CBS NEWS — Several changes in the network’s Washington bureau were announced today: MARK LIMA is joining from the west coast to become VP and Washington bureau chief, “Face the Nation’s” MARY HAGER is taking on an additional role as executive editor for politics, and MATTHEW MOSK is joining from ABC to become senior investigative editorial director.

— Speaking of CBS News, today was GAYLE KING’s 10th anniversary there. She’ll be on “Colbert” tonight.

A message from the Freedom to Vote Alliance:

A strong economy depends on a strong democracy. But the cornerstone of our democratic system – the freedom to vote – is under attack. States nationwide are making it harder to cast ballots and easier for partisan officials to overturn election results.

For businesses to prosper, our basic rights must be protected. The Freedom to Vote Alliance is calling on the Senate to reform its rules and give voting rights legislation a straight up or down vote.

A PREVIEW OF 2023? — House Minority Leader KEVIN MCCARTHY told Breitbart in a new interview out today that if Republicans retake the chamber, he’ll move to kick Reps. ADAM SCHIFF (D-Calif.) and ERIC SWALWELL (D-Calif.) off the Intel Committee and Rep. ILHAN OMAR (D-Minn.) off the Foreign Affairs Committee. That would retaliate against Democratic moves to strip the fringiest members of the GOP Conference of their committee assignments. More from Olivia Beavers and Andrew Desiderio in Congress Minutes

LATEST IN GENEVA — The first day of talks between Russia and the U.S. ended after almost eight hours with a plan to keep discussing and a Russian declaration that they didn’t plan to invade Ukraine, per NYT’s Anton Troianovski, David Sanger and Michael Crowley. The U.S. rejected Russian security demands on NATO and Ukraine, but the two sides talked about the possible revival of the Intermediate-Range Nuclear Forces Treaty. Still a long way to go.

THE NEW GOP — DONALD TRUMP today trashed Sen. MIKE ROUNDS (R-S.D.) for not lying about the 2020 election, and said that “even though his election will not be coming up for 5 years, I will never endorse this jerk again.” On Sunday, Rounds acknowledged the reality that JOE BIDEN won the election fairly. (Trump said Rounds “just went woke,” and repeatedly referred to him while putting “Senator” in quotation marks.)

DEMOCRACY WATCH — A Wisconsin judge today allowed state Republicans’ probe of the 2020 election to continue, in the type of project that experts say is “harmful to the democratic system” by allowing lies about election fraud to fester, Zach Montellaro reports. Democratic state A.G. JOSH KAUL has been trying to stop the review, led by a former state Supreme Court justice; litigation is ongoing. More from the Milwaukee Journal Sentinel

POLITICAL VIOLENCE WATCH — THOMAS WELNICKI, a 72-year-old man from Queens, was arrested by Secret Service police today for allegedly threatening multiple times to kill Trump and other politicians who supported him. “Oh yeah, that’s a threat, come and arrest me,” he said in one voicemail, according to law enforcement. (They did.) More from the N.Y. Daily News

THE BRAVE NEW WORLD — A pair of congressional candidates are among the first politicians to jump into the world of non-fungible tokens, selling them to raise cash for their campaigns, Bloomberg’s Ken Doyle reports. California Democrat SHRINA KURANI and Arizona Republican BLAKE MASTERS have offered NFTs to donors, though some questions remain about how cryptocurrency donations will intersect with campaign finance laws. “Fundraising consultants say crypto is still a ways off from becoming a regular source for contributions.”

MANCHIN IN THE MIDDLE — Sen. JOE MANCHIN’s (D-W.Va.) opposition to the Build Back Better bill may be the centerpiece of a national debate, but NYT’s Jonathan Weisman reports that a smaller BBB battle close to home could have more of an impact on him: the coal miners’ union (which supports BBB) vs. the mine owners (who oppose it). The West Virginian has close personal ties to both groups, and the divide between them is perhaps most pronounced over manufacturing/industrial policy: “The miners appear to have embraced the reality that coal is dying and they must look beyond it to survive, but their bosses do not see the end as inevitable.”

A GRAIN OF SALT — The death of BBB and the ongoing battle over whether to restore the state and local tax deduction limit has swing-seat Democrats in wealthy suburban areas worried about November, report Bloomberg’s Mike Dorning, Laura Davison and Gregory Korte. They’ve got interactive graphics breaking down which members’ districts are hit the hardest by the SALT cap.

HISTORY LESSON — WaPo’s Julie Zauzmer Weil, Adrian Blanco and Leo Dominguez are out with an astonishing project compiling the first-ever database of the more than 1,700 members of Congress who enslaved Black people. They represented 37 states and more than 60 parties, and served in Congress as late as the 1920s. “This database helps provide a clearer understanding of the ways in which slaveholding influenced early America, as congressmen’s own interests as enslavers shaped their decisions on the laws that they crafted.”

WHAT JARED KUSHNER IS READING — A new, bipartisan “Abraham Accords Caucus” is launching this week in both chambers to cheerlead the normalization agreements Israel signed with several Arab states during the Trump administration, Jewish Insider’s Marc Rod scooped.

INFLATION WATCH — The Biden administration has recently attempted to link the fight against inflation to its antitrust efforts, blaming monopolies and corporate greed for high prices. But liberal economists — both inside and outside the administration — are divided over how legitimate that line of critique is, WaPo’s Jeff Stein reports. Top Treasury officials are skeptical of how much blame can really be assigned to big corporations; they’re pushing for the U.S. to lift tariffs on China to address inflation. But “[s]everal economists and market analysts said there is proof that large firms are using the cover of inflation to raise prices on consumers and increase their profit margins, particularly in beef.”

FED UP — In a sharp about-face from the past two years, the Federal…