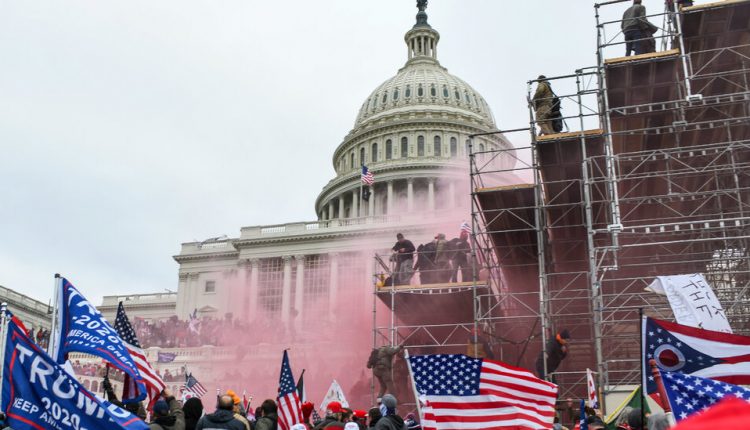 WASHINGTON — Members of Congress, police officers and government watchdog groups argued in federal court on Monday that Donald J. Trump was liable for major financial damages for his role in inspiring the Jan. 6 attack on Congress, pressing an array of civil suits against the former president amid mounting frustration that he has faced no penalty for the riot.

Over nearly five hours in the United States District Court for Washington, lawyers laid out their cases against Mr. Trump, contending that he deserved to be held responsible for inflaming a violent mob, despite what are typically wide immunity protections for a president’s speech and actions while in office.

“Mr. Trump dispatched the crowd that he assembled,” said Joseph Sellers, the lawyer for a group of House Democrats, including Representatives Barbara Lee of California, Bonnie Watson Coleman of New Jersey and Hank Johnson of Georgia. “After he saw that they were engaged in breaking into the Capitol, instead of trying to calm them, he retweeted his incendiary remarks from the rally before.”

During a hearing over whether the suits can move forward, Judge Amit P. Mehta focused on why Mr. Trump did not act more quickly to call off the mob. He asked lawyers for Mr. Trump whether the president’s slow response was not evidence he agreed with the siege after telling the crowd to “fight like hell” and march to the Capitol.

“You have an almost two-hour period in which the president doesn’t take to Twitter or to any other type of communication and say: ‘Stop. Get out of the Capitol,’” the judge said, adding, “If my words were misconstrued and they led to violence, wouldn’t a reasonable person whose words were being misconstrued come out and say: ‘Wait a minute. Stop’?”

Mr. Trump’s lawyer, Jesse R. Binnall, argued that the suits should be dismissed because his remarks inflaming the crowd were protected by presidential immunity and his First Amendment right to free speech. He asserted that Mr. Trump had told the crowd to “peacefully and patriotically” march on the Capitol.

“These cases should be dismissed because they never should have been brought in the first place,” Mr. Binnall said. “The complaints themselves are void of any legal basis. Instead, they’re chock-full of propaganda that’s meant to achieve a political rather than a legal objective.”

Both the Justice Department and a House select committee are investigating the events of the Capitol riot. Here’s where they stand:

Judge Mehta also invoked a lawsuit against organizers of the deadly 2017 “Unite the Right” rally in the Charlottesville, Va., noting that the allegations against the white nationalist Richard Spencer and other defendants included inciting violence and then failing to stop it. Jurors in that case found the organizers liable under state law for injuries to counterprotesters, awarding more than $25 million in damages.

But Judge Mehta wrestled openly on Monday with the constitutional issues of trying to hold a president accountable through the civil courts. He noted that presidents could be prosecuted criminally only after leaving office, but he said the Supreme Court had granted “even broader” immunity protections from civil suits.

“This is not an easy case,” the judge said. “I’ve struggled with a lot of these issues because they raise a lot of important constitutional questions.”

The House Democrats’ suit accuses Mr. Trump, his personal lawyer Rudolph W. Giuliani and two militia groups, the Proud Boys and the Oath Keepers, of conspiring to incite violence on Jan. 6. (Representative Bennie Thompson, Democrat of Mississippi, had been a plaintiff in the suit but withdrew after he was named chairman of the House committee investigating the attack.)

A second suit was filed by Representative Eric Swalwell, Democrat of California, against Mr. Trump, his son Donald Trump Jr., Mr. Giuliani and Representative Mo Brooks, Republican of Alabama, accusing them of inciting the mob violence.

A third was filed by two Capitol Police officers who argued that Mr. Trump was responsible for the physical and emotional injuries they had suffered as a result of the day’s events.

Mr. Brooks, who wore body armor onstage at a rally preceding the violence as he told the crowd to “start taking down names and kicking ass,” represented himself at Monday’s hearing after the Justice Department declined to do so. He argued that his own efforts to undermine the 2020 election were no different from tactics used by Democrats, who objected to previous presidential certifications.

“This was not to inspire people to attack the Capitol,” he said of his speech.

The lawsuits are an effort to subject Mr. Trump to some sort of accountability a year after the attack.

By a vote of 43 to 57 last year, the Senate acquitted Mr. Trump of inciting insurrection, falling short of the two-thirds needed to convict him.

After voting to acquit him, Senator Mitch McConnell, Republican of Kentucky, seemed to invite lawsuits against Mr. Trump, asserting that he was “practically and morally responsible” for the violence and could still be “liable for everything he did while he was in office as an ordinary citizen.”

Key Figures in the Jan. 6 Inquiry

Mark Meadows. Mr. Trump’s chief of staff, who initially provided the panel with a trove of documents that showed the extent of his role in the efforts to overturn the election, is now refusing to cooperate. The House voted to recommend holding Mr. Meadows in criminal contempt of Congress.

Scott Perry and Jim Jordan. The Republican representatives of Pennsylvania and Ohio are among a group of G.O.P. congressmen who were deeply involved in efforts to overturn the election. Both Mr. Perry and Mr. Jordan have refused to cooperate with the panel.

John Eastman. The lawyer has been the subject of intense scrutiny since writing a memo that laid out how Mr. Trump could stay in power. Mr. Eastman was present at a meeting of Trump allies at the Willard Hotel that has become a prime focus of the panel.

To date, Mr. Trump has not faced a subpoena from either the Justice Department or the House committee investigating the Capitol riot.

Alan Rozenshtein, a former Justice Department official who teaches at the University of Minnesota Law School, said he disagreed with the claim by Mr. Trump’s lawyer that there was essentially no situation in which a president could be sued. But he also said that lawyers for the plaintiffs may not have argued persuasively that presidential immunity did not apply in this particular case.

“This is a hard case — that’s my bottom line,” Mr. Rozenshstein said.

The latest, filed by Officer Briana Kirkland of the Capitol Police, says that she left the Capitol on Jan. 6 “covered in chemical spray, blood, with a traumatic brain injury that would cost her a year of her personal and professional life, and physical and personal injuries that will be with her indefinitely.”

Other suits were filed by Officer Marcus Moore, a 10-year veteran of the Capitol Police who is invoking the Ku Klux Klan Act of 1871, and two Washington police officers, Bobby Tabron and DeDivine K. Carter, who were attacked outside the Capitol in an area officers now refer to as the “Tunnel of Death.”

The suits bring to at least seven the number filed against Mr. Trump by people who were at the Capitol during the attack.