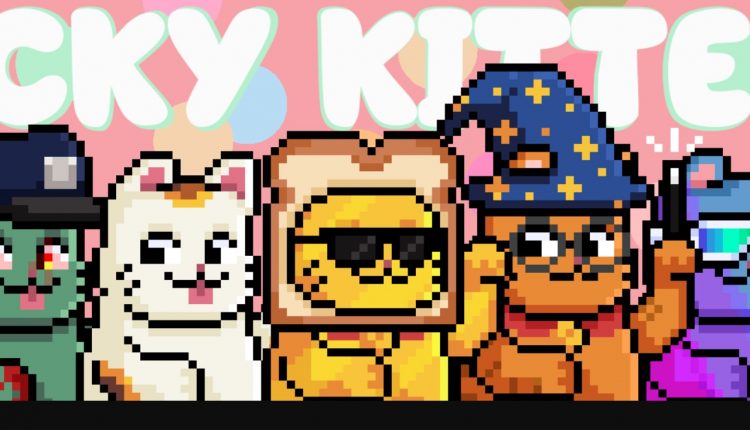 Crash of the Stablecoin: How is the Indian Crypto…

A relatable image is one of the factors that can catapult a non-fungible token (NFT) collection to success, but the problem is, most creators wrongly took this ‘relatable’ element by merely producing copycat creations. While the NFT market is awash with all sorts of monkey images, one team decided to do something different and launch a collection based on a similarly iconic image: Lucky cats.

The team behind the collection, which has backgrounds in art and traditional finance, has been in the crypto world since 2014 but only decided to launch an NFT collection last December 12, 2021.

Thanks to their dedication and unique outlook, all their hard work was paid off with the success of their first-ever NFT collection.

What is Lucky Kittens?

Lucky Kittens is an algorithmically-generated Solana-based NFT collection composed of 5,888 pixelated cats. This collection, which had a mint price of 0.88 SOL, is inspired by “Maneki-Nekos,” widely known in Japanese culture as the lucky cat, which symbolizes success and fortune.

It took only four days for the collection to be sold out, which is impressive, given the stiff competition for attention in the NFT space.

Maneki-Nekos are deeply ingrained in Japanese culture as these lucky cats can be found in restaurants, shops, business establishments, and other public places.

And thanks to the popularity of these cats in various cultures, the Lucky Kittens has immediately attained success.

Since the entire collection is now sold out, it will now be available on Solana secondary marketplaces such as Magic Eden, Moonverse, and Alpha Art. Interested buyers must use Solana crypto wallets, including Phantom, Solflare, and Sollet.

The team shared in DIMSUMDaily that it took them just over three months to conceptualize, design, execute, and launch the Lucky Kittens collection.

And even with the success they’ve attained on their first NFT collection, the team is actually just getting started as they have long-term plans for their virtual cats.

Soon, they will launch the “Kitten Klubs,” which are events or physical meetups that will be done in various parts of the world, and are meant to spread the collection’s popularity and better connect with the community.

The team wants to kick start the Kitten Klubs in Hong Kong and is currently planning to set up a “pop-up museum” to introduce NFTs to more people, especially those who are not still familiar with these digital assets.

These museums will have special sections for Lucky Kittens owners, which will provide exclusive experiences for them. The team is set to announce details regarding these plans soon.

Unlike the usual 10,000 NFTs found in most collections, the Lucky Kittens team chose to limit the quantity of the images to just 5,888.

They initially chose the 8,000 limit, but the team discovered that their community prefers a smaller collection, to which they happily agreed.

The team decided to balance everything and not make the collection too small and settled into 5,888, just enough to satisfy the community’s demands and avoid the risk of too much exclusivity.

Launch Kollective is a launchpad to support NFT projects and it is the Lucky Kitten team’s biggest project since its successful NFT collection launch.

The launchpad is set to collaborate and support Hong Kong-based projects before it jumps on the international NFT space to handle bigger projects.

Since the team had first-hand experience in creating and launching a successful NFT collection, they were approached by many artists on how to dive into the NFT space properly.

And this launchpad is their response to the growing needs of many artists and teams in exploring the world of NFTs and tapping its immense opportunities.

What’s In It For Lucky Kitten Holders?

Some might see this launchpad as counterproductive since the team’s time and attention for the still-growing Lucky Kitten collection would indeed be divided.

This is a legitimate concern, but the team assured that this launchpad would still be relevant, not only for Lucky Kitten’s holders but also for the Solana community.

One of the exciting things that Launch Kollective has for Lucky Kitten holders is the privilege to gain access to OG/whitelist and private allocations on projects that the launchpad will launch.

The team will soon launch an official token, together with its whitepaper and tokenomics, and this token will work for both Lucky Kittens and the Launch Kollective. Further details will soon be released on Lucky Kittens’ official social media accounts.

1. Launch of Lucky Kittens and whitelist for early collection supporters on Discord and Twitter.

2. Release of “Rarity Stats” to help Lucky Kitten holders determine the level of their kitten’s rarity.

3. Kittens will now be tradable, and those who have missed the minting event can now purchase Lucky Kittens on secondary markets.

4. Launch of Kittens Klub Fund. Community members vote on where the funds should be spent.

5. Physical Kittens Klub facilities will be established in various parts of the world to serve as hangouts for both Lucky Kittens holders and fans.

Established brands and celebrities have already recognized the immense potential of Lucky Kittens to be a strong brand in the near future; no wonder they didn’t hesitate to collaborate with the collection as early as now.

The team has also collaborated with some of Asia’s icons, including Ellie Furuya and Joey Law.

Furuya is a lifestyle influencer, food blogger and works in National Geographic Asia, while Law is a Hong Kong-based actor known for his role in the 2009 movie “Love Kickoff.”

Even with its successful launch, collaborations, and upcoming offerings, Lucky Kittens is still relatively early in the game, which means that anything can happen that might affect its momentum.

But suppose it continues to follow an upward path, it has the big potential to create bigger impacts in the near future, primarily because of its collection, upcoming token, and launchpad.