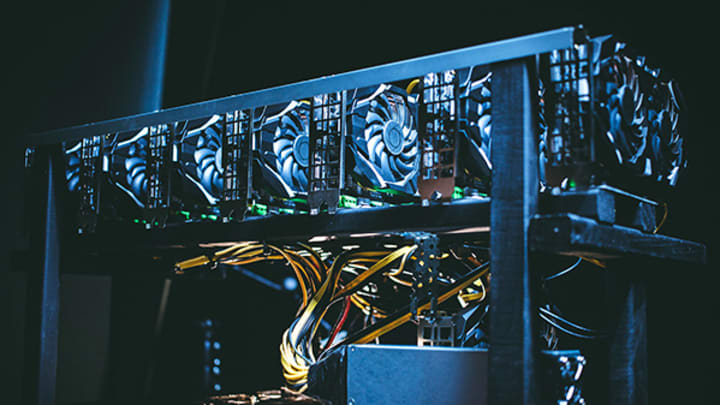 As most PC players are aware, the GPU and overall PC part market is going through a rough time.

With a large increase in prices, those looking for PC parts will struggle to get anything worth purchasing right now.

This chart from GPU Prices: Tracking Graphics Cards Sold on eBay has been keeping track of graphics card prices dating back from Feb. 2021 to, most recently, Dec. 2021.

A large combination of things has led the market to this point: the global pandemic, cryptocurrency mining, and production limitations all culminating in a lack of supply and a lot of demand.

Why Are PC Parts So Expensive?

The main reason that GPU prices in specific have gone up exponentially is because of crypto mining.

Before crypto hit its peak in late 2020, good graphics cards meant nothing to anyone who wasn’t a PC gamer, video editor, vfx editor, or game developer.

Bitcoin is currently worth 42,000 USD and holds a solid place within mainstream media.

Because of this, a lot more people want a GPU capable of crypto mining which creates a passive income without the person having to do much more than own a graphics card powerful enough to handle it.

Due to how easy so many people make it look, the demand for graphics cards as of 2022 is much more than anyone ever thought it’d get, and resellers are jacking up the prices of these parts by double or more.

What is Bitcoin Mining?

In its simplest terms, bitcoin and crypto mining, in general, is the process in which people put out more of a certain cryptocurrency into circulation.

For the mining to take place, the hardware is given an extremely complex math problem and the first computer to solve is “awarded” the crypto they were mining.

By mining, those who are interested in cryptocurrency can receive it without putting down money on the blockchain (or crypto database).

According to Investopedia, “You need either a GPU (graphics processing unit) or an application-specific integrated circuit (ASIC) in order to set up a mining rig.”

How Can PC Gamers Get GPUs?

Currently, the only ways to get a graphics card with the state of the market are either on back-order through retail sites like Amazon and Best Buy, or resort to an extremely priced up part sold by a reseller.

As of a few years ago, Reddit was all jokes when it came to the GPU shortage, but now the PC part subreddits such as r/pcmasterrace and r/buildapc are just speculating when it will end.

“Honestly looking at late 2023 for MSRP prices to be within range for manufacturers and probably, like, 2028… for whatever the current gen GPUs are to be at launch price,” u/_paolosworld_ wrote, “in other words, we’re stuck… RIP GPUs until like 5 years from now or something.”

Despite this, Ethereum, another major player in the crypto market, is planning to switch to proof of stake this coming June. This means that the mining will most likely being unprofitable, according to u/0xGecco.

And, as a little bit of good news, Nvidia has announced that we may see the supply and demand improve during the second half of 2022.

Cheaper Ways to Game on PC

There’s a multitude of cheaper ways to game on PC, with players options being buying a prebuilt pc if they’re looking to upgrade their system or saving up by looking for game deals.

Many people are looking to buy prebuilt PCs, if you’re looking for new hardware, though that comes at a hefty price, it’s still much cheaper than buying single parts with the state of the market right now.

The best places to look for prebuilt systems include Amazon and Best Buy or local retailers if you’re not located in the United States.

There’s also using services such as PC Game Pass to afford games that are playable on your current specifications.

Microsoft’s PC Game Pass is currently one of the best deals in gaming, charging players only $10 for the standard Game Pass and $15 for Game Pass Ultimate with the first month for new users being $1.

With Game Pass, players can spend a set cost every month and get new games with every penny spent. As of right now, many games are releasing directly onto Game Pass, which means players can even get brand new games through it for a cheaper price.

This allows players to save money and upgrade their PC later, if they want to.

While there is currently no end in sight for the GPU shortage, hopefully the two ways above help players in saving up or getting the system they want without spending a huge chunk of money on resold products.


Read More: How the Average PC Gamer Can’t Afford to Build Their Own PC