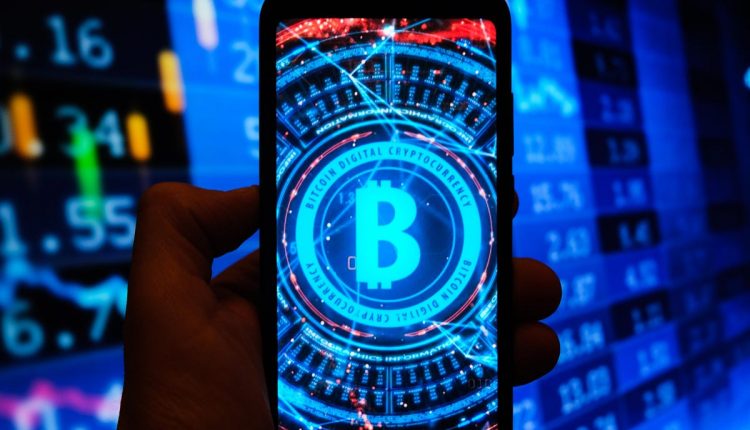 The sudden sell-off comes as stock markets around the world sink, with the tech-heavy Nasdaq 100
falling into correction territory as investors face up to the reality of a more hawkish Federal Reserve and higher interest rates.

Sign up now for the free CryptoCodex—A daily newsletter for the crypto-curious. Helping you understand the world of bitcoin and crypto, every weekday

Ethereum, the second-largest cryptocurrency after bitcoin, has dropped under the closely-watched $3,000 per ether level, as ethereum’s biggest rivals BNB, solana and cardano have all moved sharply lower after making huge gains over the last year.

The crypto price crash has now seen around $1.2 trillion wiped from the combined crypto market after it hit an all-time high of $3 trillion in November. The bitcoin price is down almost 50% from its peak of nearly $70,000 per bitcoin.

Investor nerves have been frayed in recent months by the looming prospect the unprecedented pandemic-era stimulus from the Fed and other central banks could soon be wound down. Earlier this month, markets were spooked by the news Fed officials had floated the idea of shrinking the bank’s balance sheet alongside its expected interest rate rises.

The Fed is being forced to act sooner and more severely than the market had expected by soaring inflation that has already seen prices accelerate at a pace not seen for decades.

As crypto prices struggle, cryptocurrency funds recorded a fifth consecutive week of outflows last week, according to a report from digital asset manager CoinShares. It found total outflows over this period for the whole crypto market reached to $532 million, the sharpest outflows since 2018.

“I think the main reason for this is the market being spooked by the Federal Reserve raising rates this year, but when the stock market sees some relief, I expect a strong squeeze to the upside for bitcoin and the whole market,” Marcus Sotiriou, analyst at the U.K.-based digital asset broker GlobalBlock, wrote in a note ahead of the latest crypto price crash.

Earlier on Thursday, the Fed released its highly-anticipated report on a potential digital dollar, a so-called central bank digital currency (CBDC) inspired by bitcoin and cryptocurrencies that governments and central banks around the world have been experimenting with in recent years and some think could up-end the global financial system.

The report, authored by the Fed’s seven-member board of governors, found a digital dollar could “fundamentally change” the banking system and its relationship with the Federal Reserve, with a digital dollar able to serve as a “near-perfect” substitute for commercial bank money.

Meanwhile, the sudden crypto price crash comes shortly after reports Russia is set to follow China in banning bitcoin and crypto, warning that crypto assets are a threat to the country’s financial stability, its citizens’ wellbeing and its monetary policy sovereignty.

China’s comprehensive crypto ban last year saw the country expel those who use high-powered computers to secure blockchains in return for new coins and sent bitcoin and crypto prices spiraling.

Russia’s central bank said the bitcoin price and the rapid growth of cryptocurrencies has been driven by speculative demand and that cryptocurrencies carry characteristics of a pyramid scheme, warning of potential bubbles in the market.

“The Bank of Russia has hinted at the possibility of a sweeping ban on crypto many times before so this recent development is hardly surprising,” Anto Paroian, Chief Operating Officer, at cryptocurrency hedge fund ARK36, said in emailed comments.

“Importantly, the ban will also outlaw any crypto mining activities. As this would negatively affect bitcoin’s hashrate, some investors may be wondering whether the ban, when enforced, could result in more selling pressure on the price of this asset.”

Russia proposes ban on use and mining of cryptocurrencies

Crypto plummets with $200B wiped in 24hrs