How to mine Ethereum: A step-by-step guide 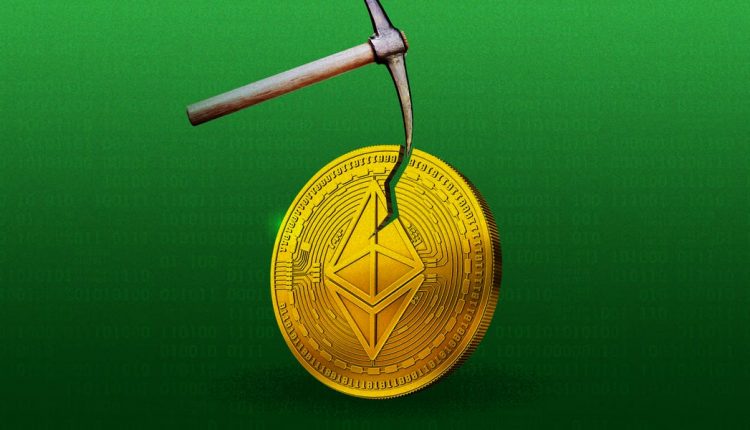 Ethereum is a digital platform that runs on blockchain technology. It’s most commonly known for its smart contract functionality and native cryptocurrency, ether. The broader purpose of the Ethereum network is to enable decentralized apps (dApps), such as marketplaces for nonfungible tokens (NFTs).

Transactions within these programs are publicly distributed and don’t require a central authority for governance. As a result, the Ethereum network needs a global system of computers to compile and verify each batch of transactions (i.e., a block) within the platform’s blockchain.

That’s where mining comes into play. In essence, miners use the computing power of dedicated hardware to solve complex puzzles. This process not only allows the network to function but also protects it from hacking and other malicious attacks. In exchange for their services, miners receive a transaction fee — a predetermined amount of ether upon the successful validation of a block.

The Ethereum network is anticipated to move to a different incentive model, called proof of stake (PoS), at some point in 2022. However, if you want to explore Ethereum mining in the meantime, we’ve outlined the set-up process and best practices.

There are currently three different approaches to Ethereum mining:

Pool mining is the most straightforward way to mine ether, especially if you don’t have much hardware. That’s because mining Ethereum has gotten increasingly difficult and time-consuming as more coins have entered circulation. Pool mining allows miners to combine their collective computing power to solve Ethereum blocks in less time. In turn, the rewards are split between the group based on power contribution, which is measured by hashpower.

Important: Hashpower is the computing power used by your hardware to solve crypto algorithms.

Solo mining is more complex and requires considerable hashpower. To solve puzzles in a realistic amount of time by yourself, you’d likely need a farm of elaborate mining rigs powered by dozens of graphics cards. If you choose this route, it’s important to consider the financial and spatial implications. Beyond equipment cost, which could be thousands if not tens of thousands of dollars, you should also evaluate factors like ventilation, noise, electricity costs, and physical space.

For these reasons, solo mining is generally only recommended for professional miners who are willing to make a significant capital investment. That said, this approach can be more profitable in the long run, as you would avoid fees and shared profits.

Cloud mining is usually the easiest mining approach in terms of barrier to entry. Under this approach, you don’t need to buy a fancy system or commit your personal computer to mining. Instead, you pay another miner an upfront fee to mine coins for you. They do the mining, while you receive the newly minted coins. However, renting another miner’s computer power introduces additional risks, such as scams and fraud. If you don’t entrust this service to a reputable miner, it’s possible that they may simply take your upfront payment and run.

Cryptocurrency is digital, so you don’t have to worry about loose coins. But you still need something to stow your holdings. That’s where crypto wallets come into play. Crypto wallets store your coins, much like a bank account houses your paychecks. There are two general types of wallets: hardware wallets and software wallets.

There are pros and cons to both. Hardware wallets are generally regarded as safer because they aren’t linked to an online platform. That said, they’re usually more expensive and less convenient than a software wallet. On the other hand, software wallets are far more convenient, as you can access them through a web browser or mobile app. Conversely, that means they’re more susceptible to hacking than an offline wallet.

Regardless of type, wallets have two important keys with distinct purposes. The first is a public key, and it allows other parties to transact with your wallet. The second is a private key, which grants access to the wallet. As the name implies, you must safeguard your private key — otherwise, someone else could take control of your funds.

So, if you want to mine ether, you’ll need an Etherum wallet. Once you open a wallet, you’ll have a public key that you can use during the mining configuration process. For instance, if you join a mining pool, you’ll link your wallet and receive periodic coin distributions based on your hashpower contribution to the pool.

Step 3: Make sure you have the right hardware and software

Before you start mining ether, you’ll have to set up your infrastructure. Mining cryptocurrency requires a ton of computing power. So, you’ll need a strong computer — colloquially known as a “rig” — if you want to mine ether profitably. Your hardware setup largely depends on what mining approach you choose.

If you’re a more casual miner, consider joining a mining pool. In that case, you’d likely need a combination of the following:

On the other hand, if you plan to be a hardcore miner and pursue the solo mining path, you’ll have to set aside a sizable sum for equipment, not to mention physical storage space. While you could still elect to load up on GPUs, you may want to consider a more expensive but also potentially more efficient alternative: Application-Specific Integrated Circuit (ASIC) mining.

ASIC mining rigs are designed specifically to mine crypto. For that reason, they tend to generate more computing power and solve blocks in less time. But there are trade-offs. ASICs can retail for tens of thousands of dollars, creating a high barrier to entry for the average miner. ASICs can also consume much more power than GPUs, which may drive up electricity bills. On top of that, ASICs are optimized for a specific coin — such as Ethereum or Bitcoin — whereas GPUs can mine any coin.

“With the arrival of the PoS model looming, I would recommend purchasing a GPU over an ASIC rig,” says Jeff Adams, data center operations and crypto mining strategic consultant at MineHog.

“Unfortunately, ASIC miners will see their rigs become obsolete when Ethereum 2.0 is implemented. Without being able to sell any of its components for more than a few bucks, using it as a space heater during the winter months might be the most value you can get out of it in the future,” Adams adds.

Quick tip: If you’re unsure about mining ether or you want to explore other altcoins, consider browsing whattomine.com, which outlines the most profitable coins based on your GPU.

There are pros and cons to both GPU and ASIC mining, which we’ve summarized in the following table.

Unless you’re willing to invest tens of thousands of dollars in equipment, a mining pool is the simplest way into crypto mining. But it’s still prudent for aspiring miners to review their pool options before moving forward.

Pools can vary in structure, such as pool size, hashrate, payout, and fees. For instance, as of this writing, Ethermine has more than 400,000 active miners while 2miners has more than 80,000. This influences the pool’s block-solving speed and, in turn, its payout. But there are far more than two pools to pick from — you can use

Read More: How to mine Ethereum: A step-by-step guide