Decentraland Guide and Review: How to Play the Blockchain Game? 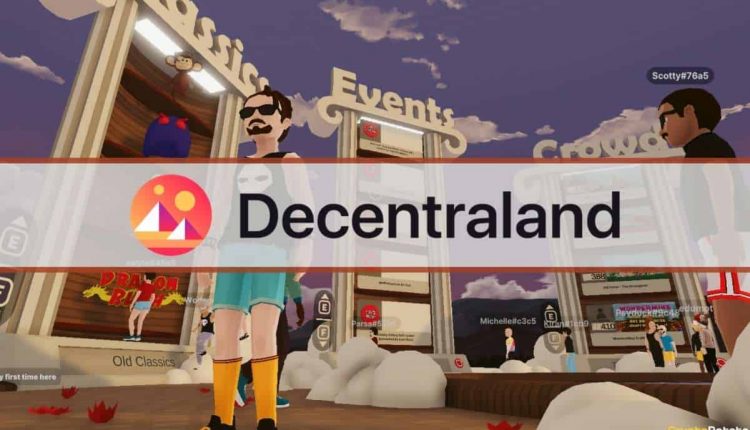 Online gaming is arguably one of the best use cases for blockchain-based technology. The ability to assign traceable and verifiable ownership to in-game items provides tremendous capabilities.

This concept has grown in popularity, and perhaps one of the first games to pioneer the field was Decentraland.

The below is a comprehensive guide on Decentraland – what it stands for, how it was launched, and how to play it in a detailed step-by-step guide.

What is it about: Decentraland is a decentralized virtual platform where users can create, travel, and monetize experiences, content, and applications.

Decentraland brings forward a decentralized virtual reality (VR) platform that’s built on top and powered by the Ethereum blockchain. Within it, users are able to create, experience, and monetize experiences, applications, and content.

In essence, it’s a virtual reality where the 3D land is permanently owned by the community, which provides members with absolute control over their creations. You can log in, create an avatar, and start exploring, buying land, and building all sorts of builds ranging from playgrounds to virtual cinemas and galleries.

Those who own land can control the content published to their portion of the land and these contents can range from interactive systems such as games to static 3D scenes such as paintings, for instance.

One thing that makes Decentraland different compared to other popular blockchain-based games is the fact that it’s not controlled by a centralized organization. Instead, there’s a Decentralized Autonomous Organization (DAO) that governs the policies created to determine how the Decentraland world would behave.

As of writing this, there are already many cool places that users can visit in Decentraland, but more on that in the How to Play section below.

The Decentraland DAO was created to turn the game into the first truly and fully decentralized virtual world and it has been a part of the original vision of the game’s developers.

The DAO owns the most important smart contracts, as well as the assets that make up Decentraland – the LAND Contract, the wearables, the content servers, the Estates Contract, and the marketplace.

This DAO also owns a lot of the game’s native MANA tokens, which allows it to be autonomous while also enabling it to subsidize different operations and initiatives.

Those who participate in the DAO (read all LAND and MANA holders) can schedule votes to decide on different issues such as:

The Team Behind Decentraland

Decentraland was conceptualized in a detailed whitepaper written by Esteban Ordano, Ariel Meilich, Yemel Jardi, and Manuel Araoz. It’s also worth noting that they got some help from notable experts such as Michael Bosworth from Google, Jon Choi from Dropbox, Jake Brukham from CoinFund, and so forth.

The team’s vision became a reality on February 20th, 2020 (20.02.2020), when Decentraland went live to the public. The launch included the establishment of the Decentraland DAO, as well as the full decentralization of the world’s infrastructure and the public access to what it had to offer.

It was an important moment in Decentraland’s development roadmap because, after it, no single entity was ever able to single-handedly modify the rules of its code stack.

While there are no verified sources of information revealing the current playebrase of Decentraland, the fact that it has grown to become one of the leading metaverse-based virtual realities in the blockchain industry right now (as of writing these lines in January 2022) is undeniable.

A lot of this was made possible thanks to the big players who stepped through its digital doors and set foot into its digital lands.

Speaking of partnerships, one of the most considerable advents in this regard was surely Samsung revealing its attempts to dive deeper into the metaverse through Decentraland. These include limited-supply collections of Samsung Decentraland wearables that users can buy to customize their in-game avatars.

One of the four tennis Grand Slam tournaments – the Australian Open, also announced that it will join the metaverse by partnering up with Decentraland.

One of the well-known backers of the project is the industry-leading Digital Currency Group spearheaded by famous crypto proponent Barry Silbert.

In June 2021, Sotheby’s – the world’s older auction house, also claimed its stake in the metaverse. It opened the first-ever virtual gallery, choosing Decentraland as the main destination. This is how it looks from within the game itself:

The game itself is comprised of many parts, and its intricacies are numerous. However, understanding its tokenomics is critical to being able to play it. The two primary tokens in Decentraland are LAND and MANA.

The land within the Decentraland metaverse is represented by non-fungible LAND tokens. In essence, these are non-fungible tokens (NFTs) that track the land ownership on Ethereum’s blockchain.

For a detailed guide on what is an NFT – take a look here. To see how to mint NFTs on OpenSea – click here.

LAND tokens are built on top of the ERC721 protocol standard which makes it a digital asset that can be traded with other users – just like any other NFT.

One of the main differences between LAND and other NFTs like the Bored Ape Yacht Club collection, for example, is that players are able to use LAND within Decentraland to construct 3D spaces and applications like in the example below:

Land parcels are 16m x 16m. The height is restricted based on these limitations as well. Moreover, LAND is a digitally scarce token, and it corresponds to the fixed total amount of MANA tokens.

How to Buy LAND?

There are a couple of ways users can buy virtual properties (LAND) in the Decentraland metaverse. The first one of them is to participate in timely auctions that are announced by the team every now and then and sell unclaimed LAND.

The more popular one is to go to Decentraland’s Marketplace and buy it there. Once you get to the marketplace, you will get prompted to connect a web wallet and we recommend that you use the most popular one – MetaMask (unless you have another one that you’re used to.) If you don’t have the wallet installed, visit the official website, install the Google Chrome extension and follow the instructions carefully.

Important: in case you install the wallet for the first time, be aware of phishing and double check you visit the correct website URL, read here for more security tips.

Once you have your wallet connected to the Marketplace, you can click on “Land” in the top left corner, and you will see the following map:

The little squares are the LAND units, and you can click on each one of them to check their details and place a bid (in case it’s owned by someone, like most of them already are). To buy it, you have to place a winning bid:

The other token that’s essential to Decentraland’s in-game economy is MANA. Unlike LAND, MANA is a fungible ERC20 cryptocurrency that can be burned or spent in exchange for LAND parcels. It can also be spent in the Decentraland Marketplace to buy various things that the game has to offer.

How to Buy MANA?

Unlike LAND, MANA is traded freely on many leading crypto exchanges such as Binance. You can create an account at each one of them and buy some of it on the open market. If you want to use them in the game, though, you need to transfer them to the wallet you are using.

Now that all of the above is clear, let’s see how to actually play the game.

How to Play Decentraland

Once you get to the official website of the game, you will see a big red button in the middle that you should click to get started. Then, you will be prompted to either play using your wallet or continue as a guest:

For this guide, we will connect a MetaMask wallet and sign the necessary permissions. Once the game loads, you will be able to create your very own avatar. This will be the character that you play the game with, so make it pretty:

There’s a bunch of traits that you can choose from, such as the body, head, top, bottom, shoes, accessories, and add different collectibles. Additionally, you can also buy items using the Marketplace but more on that below.

Once you have your avatar ready to roll, hit the “done” button in the bottom left. Now you would have to name it, agree to the terms and conditions and you’re ready to roll.

You get dropped at Genesis Plaza alongside all the new players that have just started their journey:

Notice that there’s a tutorial box towards the bottom of your screen – we highly recommend that you keep that up until you are used to playing the game, as it will give you the basics.

Once you’re at Genesis Plaza, start controlling your avatar using the…

Read More: Decentraland Guide and Review: How to Play the Blockchain Game?

NFTs In A Nutshell: A Weekly Review | Bitcoinist.com