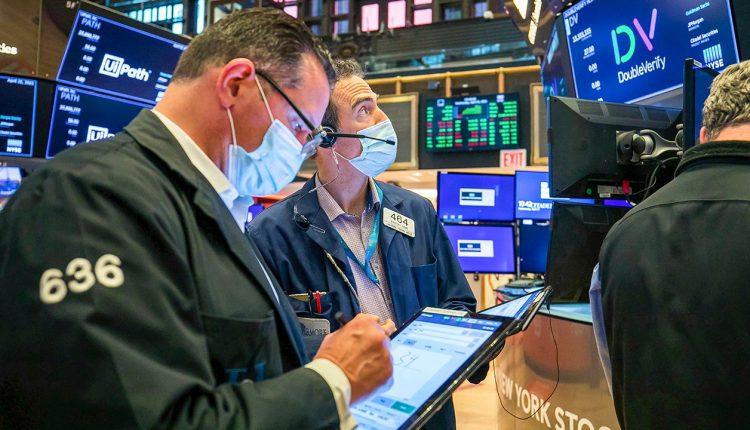 Charles Schwab Chief Investment Strategist Liz Ann Sonders on how higher interest rates will impact the market and your money.

U.S. stocks tanked on Monday ahead of a barrage of earnings and the Federal Reserve’s first meeting of the year and as tensions intensify between Russia and the Ukraine.

The Dow Jones Industrial Average fell over 800 points or 2%, while the S&P 500 lost 2.4% entering a correction, down 10% from its peak. While the Nasdaq Composite fell deeper into its own correction off 2.6%.

“We are now dealing with legitimate risk in the market,” said Jeff Sica, CIO of Circle Squared Alternative Investments.

Oil also fell to the $83 per barrel level.

In stocks, Peloton shares are in focus after the Wall Street Journal reported activist investor Blackwells Capital LLC is calling for CEO John Foley to fired after he denied reports that the company was pausing production on bikes and Treads. The stock clocked its worst day in decade last Thursday.

Kohl’s shares jumped after the company confirmed it has received multiple takeover offers without naming names. Over the weekend, a group backed by Starboard Value reportedly offered the company a deal valued at $64 per share, according to the Wall Street Journal. Separately, Engine Capital, in a letter to the retailer’s board, urged management to accept the deal.

Ford rolled out the Bronco Raptor which is being billed as “the most powerful street-legal Bronco ever” according to the automaker.

Colgate bucked the heavy selling on Wall Street with modest gains ahead of earnings on Friday.

And the Federal Reserve’s first meeting of the year takes place as investors grow more worried about how aggressively policymakers will tighten this year.

BANK OF AMERICA CEO: US ECONOMY WILL NORMALIZE IN 2023

Historically low interest rates, dubbed quantitative easing, or QE, have helped support the broader market as the economy absorbed a sharp hit from the pandemic in 2020 and then recovered over the last two years.

“The FOMC (Fed) meeting dominates the macro calendar this week and is likely to keep risk sentiment on the hesitant side with an end to QE and imminent rates hikes likely to be announced,” economists Nicholas Mapa and Robert Carnell of ING said in a commentary.

In crypto currencies, Bitcoin continued its slide to the $33,000 level.

GET FOX BUSINESS ON THE GO BY CLICKING HERE

The Associated Press contributed to this report.

Curious about cryptocurrency? 4 ways to start investing without losing your shirt

Investing Is Changing — Do Experts Think It Is for Better or Worse?