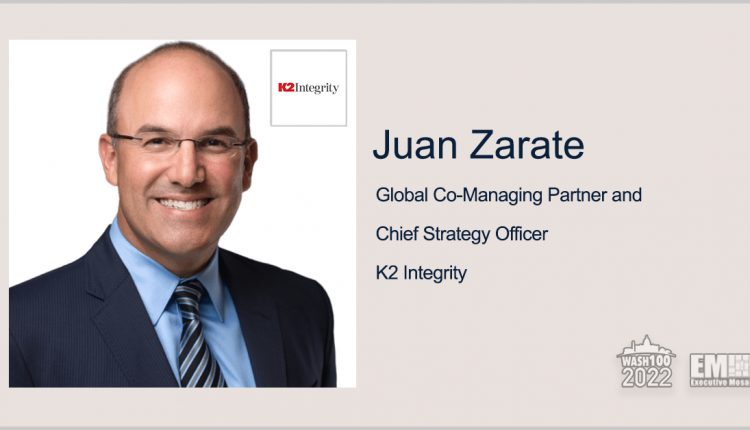 Executive Mosaic is pleased to present the Honorable Juan Zarate, global co-managing partner and chief strategy officer of K2 Integrity, as a recipient of the prestigious 2022 Wash100 Award, which annually recognizes elite public and private sector leaders for their influential contributions in the government contracting community.

Visit Wash100.com to vote for Zarate and recognize him as one of the top executives of consequence in the government contracting sector this year.

“Zarate is indeed a rare individual whose expertise and ability to achieve mastery across multiple domains is as astonishing, as is his quality of genuine interpersonal leadership,” said Jim Garrettson, CEO of Executive Mosaic and creator of the Wash100 Award.

“His impacts across government, GovCon, finance and international relationships, along with his work as an author, bilingual first-generation graduate of Harvard Law School, entrepreneur, public speaker and many other accomplishments are too lengthy to detail in a brief mention,” he added.

Garrettson continued, “Suffice it to say, any attempt to accurately provide a thumbnail of Juan’s many accomplishments, professional and personal, would be woefully incomplete.”

Zarate is recognized with this year’s Wash100 Award for his impacts in cryptocurrency across risk identification and management during a particularly consequential era in the incipient global digital economy as jurisdictions, including the United States, decide the future of digital currency use, adoption and regulation.

“Everyone around the world – all the regulators are grappling with how to regulate this in ways that we understand or that may be necessary to adapt to a very different technology and set of factors, including the decentralization of financial relationships,” Zarate said of digital currencies, during a Crypto Roundtable with MicroStrategy.

Juan Zarate will be speaking at the Potomac Officers Club’s Digital Currency and National Security Forum on Jan. 27 to share his insights on how U.S. and international governments are adapting to cryptocurrencies, the implications digital currencies have in national security efforts and what the future of a global digital economy looks like.

Zarate’s areas of expertise also include cybersecurity and mitigating the growing threat of cyber attacks.

“What you have had, I think, over the last year and a half, two years, is an uptick in the number of ransomware attacks, the amounts being demanded, and the level of sophistication of those attacks,” he told NPR, highlighting the urgent need for bolstered cybersecurity across the public and private sectors.

In his previous role as co-founder and chair of FIN, Zarate led the company through its business combination with K2 Intelligence in 2019, which resulted in the creation of K2 Integrity.

“Real reform and effectiveness require a new 21st century design that allows financial institutions, authorities, and other regulated actors in the financial system the ability to discover and manage evolving and complicated illicit financing risks to the financial system more proactively and securely,” Zarate told ExecutiveBiz in an exclusive Executive Spotlight interview on the origin and mission of Consilient.

“With Consilient, we are leapfrogging the current system with a revolutionary new design that meets the policy goals of preventing financial crime, leveraging more data and machine learning, sharing risks and resources, all the while protecting and preserving privacy,” he added.

Since 2013, Zarate has also served as an independent adviser for CoinBase, a cryptocurrency exchange platform, where he counsels the company on its regulatory posture in the evolving economy.

In this capacity, he developed and implemented the U.S. counterterrorism strategy to address transnational security threats such as organized crime, kleptocracy and anti-money laundering.

Prior to this role, Zarate acted as the first-ever assistant secretary of the treasury for terrorist financing and financial crimes during America’s post-9/11 response era. He developed international AML/CFT standards while overseeing the Financial Crimes Enforcement Network, the Office of Foreign Assets Control and the Treasury’s Executive Office for Asset Forfeiture.

He also led one of the U.S. government’s largest asset recovery missions in Iraq, which resulted in the return of over $3 billion in Iraqi assets to the U.S. and other countries.

Zarate’s career also extends past the U.S. government and into international relations. He was appointed twice by Pope Francis to serve as the U.S. representative on the board of the Vatican’s Financial Information Authority, where he oversaw the Vatican’s AML reform efforts for over five years.

Currently, Zarate serves as a senior adviser in the areas of transnational threats, counterterrorism and homeland security at the Center for Strategic and International Studies, and he is the chair of the Center on Economic and Financial Power at the Foundation for the Defense of Democracies.

He also sits on the boards of Northwestern Mutual, Boston Dynamics, Cambridge Quantum Computing’s North America branch and the Director’s Advisory Board for the National Counterterrorism Center.

Additionally, he is the author of “Treasury’s War: The Unleashing of a New Era of Financial Warfare” published in 2013 and “Forging Democracy” published in 1994.

Executive Mosaic congratulates Juan Zarate and the K2 Integrity team on their induction into the 2022 edition of the coveted Wash100 Award. Zarate’s work in AML/CFT, digital currencies, financial integrity and risk management have had a tremendous impact in the federal landscape and in industry, and Executive Mosaic is pleased to recognize Zarate with his second Wash100 Award.