Odell Beckham Jr.’s Bitcoin-based contract with Rams could be dramatically affected by 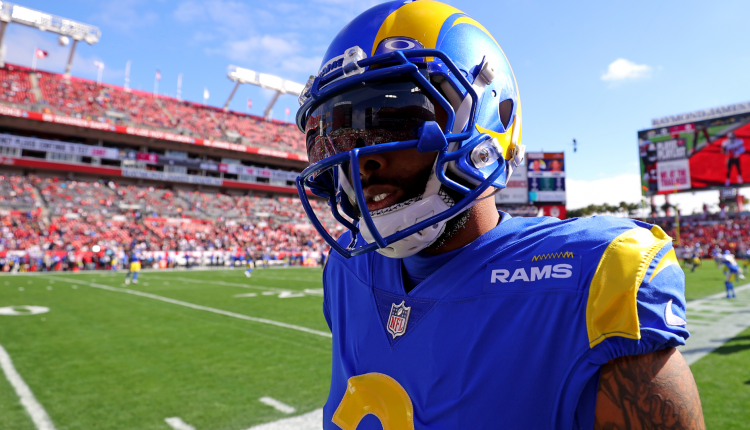 Odell Beckham has played in 10 games with the Rams (eight regular season and two postseason) since signing in LA on Nov. 11. He’s enjoyed a resurgence since joining Sean McVay’s squad, he’s hauled in 37 catches for 428 yards and six touchdowns in that span. This comes after a six-game stretch this season with the Browns, where Beckham had just 17 catches for 232 yards and no touchdowns.

Beckham’s deal with the Rams was ultimately a one-year, $1.25 million deal with a $750,00 base salary and up to $3 million in incentives, all of which revolve around team playoff success. But there’s a big catch to Beckham’s contract— it’s not being wholly paid out in U.S. dollars.

BENDER: Stafford has career-defining game against Bucs in divisional round

Rather, Beckham is taking the entire contract in Bitcoin, he announced when he signed the deal.

It’s a NEW ERA & to kick that off I’m hyped to announce that I’m taking my new salary in bitcoin thanks to @CashApp. To ALL MY FANS out there, no matter where u r: THANK YOU! I’m giving back a total of $1M in BTC rn too. Drop your $cashtag w. #OBJBTC & follow @CashApp NOW pic.twitter.com/ds1IgZ1zup

Beckham is far from the first or only NFL player to get paid in Bitcoin, as players like Saquon Barkley, Aaron Jones and Trevor Lawrence have followed suit, too. Russell Okung of the Panthers was the pioneer. He received half of his $13 million salary in Bitcoin last season and was the first player from any major U.S. sports league to receive a part or all of his salary in the cryptocurrency.

As it turns out, though, OBJ’s may have to play the long game in this investment as the cryptocurrency market is in a major downturn. It could have major implications for Beckham, Jr. and others.

The amount of people applauding players changing their salary into Bitcoin as if they were heroes has been comical.

According to Rovell, Beckham will take in just over $35,000 after taxes and the plummeting price of Bitcoin.

It should be noted, though, that Rovell’s math may not be exactly on point. Income tax is a progressive tax. Yes, OBJ would pay the top tax rate on the top end of the money not the entirety of the deal.

To make more sense of the deal, if an athlete is paid in Bitcoin, their “salary” would be “1 year, 20 Bitcoin,” for example. That athlete would be paid that no matter what the exchange rate into USD. If by week 10 Bitcoin was trading at $80K, or $20K, it wouldn’t make a difference you get the Bitcoin via an exchange or a wallet. What OBJ is really doing is getting paid in USD and then buying Bitcoin immediately. It’s no different than someone buying an index fund, or Apple stock, or even Rolls Royces with their income and seeing the investment over time.

Remember, the NFL now pays its players over the course of 36 weeks as opposed to the old pay period, which was from Week 1-17 of the regular season.

Beckham is an unrestricted free agent at the end of this season.

Will he cash in?

Ethereum Just Hit a 6-Month Low. See How Its Drop Below $2,300 Compares to Its Price

Missed the Bitcoin Rally? Try These 10 Cryptocurrencies in 2022