Melania Trump’s Auction of Hat Hit by Plunge in Cryptocurrency 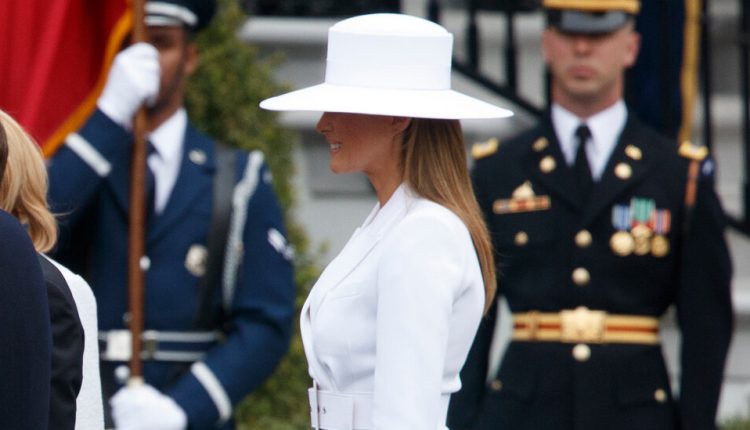 Melania Trump’s much-discussed online auction, featuring a hat she wore at the White House during a 2018 visit by President Emmanuel Macron of France, is turning into a potential victim of the crash in the cryptocurrency market.

Mrs. Trump decided to hold an online auction pairing the white, broad-brimmed hat and a watercolor of her wearing it, along with a virtual piece of art, called a nonfungible token, or NFT, which shows an animated version of her wearing the hat.

The three-piece package, called “Head of State Collection, 2022,” was intended to open with a minimum bid of about $250,000, according to a news release from Mrs. Trump in early January announcing the sale. But bids were only accepted in the cryptocurrency of the Solana blockchain called SOL, which was then trading at a price of about $170 per token.

“The one-of-a-kind NFT will be minted on Solana’s blockchain,” the website promoting the sale boasted.

But in the weeks since, SOL, along with most other cryptocurrencies, has suffered major declines in value. On the evening before the closing of the auction on Tuesday, each SOL was worth about $95.

Only a few bids appeared to have been made on Mrs. Trump’s items as of early Tuesday evening, and the value in dollars of the highest bid was around $170,000, with the exact dollar value fluctuating along with the volatile crypto market.

The auction was set to close at 2:59 a.m. Wednesday. The winning bid could still exceed the value in dollars that Mrs. Trump had targeted. But it will start from a much lower opening bid, in terms of dollars, than she had set.

Mrs. Trump has said that “a portion” of the proceeds will be used to help provide children in foster care with access to educational programs focused on computer science and technology. But she has not said how much of the proceeds she will keep herself.

Mrs. Trump could hold on to the Solana tokens and hope that their value increases. Or the dip in value might continue, leaving her with an even smaller take.

This is the second NFT sale Mrs. Trump has held since December. In the first, a group of limited edition NFTs by the same French artist, Marc-Antoine Coulon, featured a virtual watercolor of Mrs. Trump’s eyes, entitled “Melania’s Vision,” which sold for $150 apiece.

The deflated results show that even though NFT-backed cryptocurrency auctions have become a magnet for celebrities — others who have jumped into the game include Justin Bieber, Lindsay Lohan and Snoop Dogg — it remains unclear if the virtual currency system is reliable enough to build a profitable business.

“This is just evidence that none of the cryptocurrency assets provide a good, stable enough means of payment,” said Dan Awrey, a Cornell University law professor who studies money and payment systems. “It is just too volatile.”