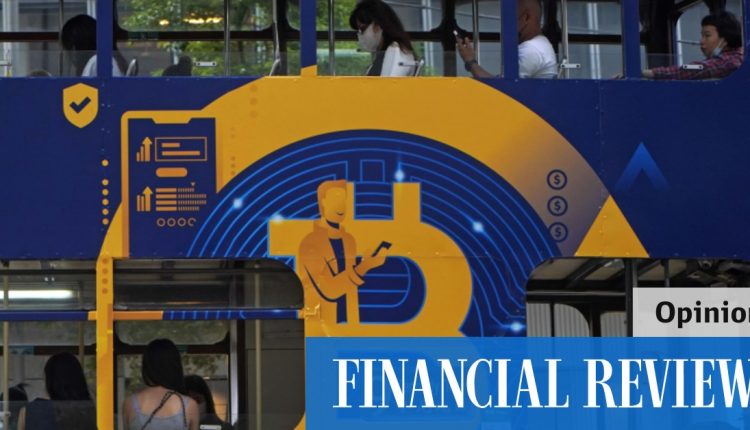 Second, scalable and trusted mediums of exchange normally require regulation and government guarantees (sovereign backing) and need to be intermediated by the government-backed banking system.

Third, non-bank entities outside the banking system frequently fail during large shocks and recessions when they cannot rely on central bank liquidity and government guarantees to bail them out, as banks can.

Finally, financial markets and the financial system are highly networked scale economies that, just like the internet, strongly favour a very small number of winners (monopolists and oligopolists) in each vertical (eg, Amazon, Microsoft, Google, Facebook etc). This leaves many losers (consider the graveyard of failed internet start-ups from the 1990s and 2000s). This is true globally of banking systems, with typically a handful of concentrated oligopolists dominating in each country, which tend to scoop up failed non-bank rivals during big crises.

Several extreme policy responses to the pandemic have nonetheless precipitated enormous interest in, and demand for, crypto.

The first involved central banks slashing their interest rates to zero per cent. Banks followed suit with the interest rates on their cash deposits. This immediately undermined the value of conventional government-guaranteed and bank-backed cash as a store of wealth.

Since investors earned next to nothing on cash, the opportunity cost of switching into new alternatives like crypto appeared to be modest, especially given the positive price action.

A positive feedback loop emerged as bitcoin and crypto generally started to experience exponential price growth by late 2020, reinforcing the perception that these alternatives to conventional currencies were viable stores of wealth, or “digital gold”, as some describe bitcoin.

This also fostered a TINA (“there-is-no-alternative”) dynamic, reinforced by central banks encouraging consumers to spend their cash savings on riskier assets in the name of supporting the economic recovery. The entire point of monetary policy crushing the risk-free rate to zero was to encourage borrowing, investment, speculation and “animal spirits”.

Demand for crypto was further powered by several other policy dynamics. Alongside zero interest rates, governments have run some of the largest fiscal deficits in history, dropping unprecedented amounts of cash into the hands of households and companies.

Notwithstanding initial concerns that the pandemic would result in depression and possibly deflation, the public policy response left households with record savings rates. Concurrently, communities were placed in lockdown, making it very hard to go out and spend this money.

With untapped cash piles and a lot of time on their hands, many consumers started experimenting with investing in the stock market, lubricated by the recent advent of zero commission brokerages (eg, Robinhood), and allocating money to cryptocurrencies.

The extraordinary performance of both asset classes over 2020 and 2021 left these new inductees to stocks and crypto with a very positive initial experience. Those who had not yet taken the leap were further motivated to do so by the stunning returns and the emergence of a clear FOMO (“fear-of-missing-out”) influence.

Equities and crypto increasingly felt like one-way bets, especially when central banks always had the market’s back: that is to say, investors assumed they could rely on the so-called Greenspan/Bernanke/Powell put option to bail them out if markets crashed.

Another tailwind for crypto has been fears that the unprecedented public policy stimulus, including record money printing by central banks, would result in a fierce inflation cycle that would undermine the value of conventional currency and cash. These fears are certainly playing out right now with strong inflation and wage growth in both the US and most other developed economies.

Crypto has generally been sold to investors on the basis of several core value propositions. First, it is a viable store of wealth outside centralised governments. Second, it will be a powerful inflation hedge in a world awash with money printing. And third, it can serve as a tractable medium of exchange.

Decentralised finance has been pitched on the basis that it offers an alternative to the centralised banking system, much like non-bank securitisers have in the past. Yet, there are some reasonable questions one can ask on the integrity of each of these ideas.

The first challenge crypto faces is that it is a non-income producing asset (in contrast to, say, equities, bonds, cash deposits and/or property) that has a value determined solely by its efficacy as a store of wealth and medium of exchange. And in contrast to precious metals, bitcoin has no other practical utility (eg, jewellery, medicine, electronics, central bank reserves etc). Yes, you can make money lending against crypto, but that is just another credit investment with the associated default, loss and liquidity risks.

The next concern with crypto is it is not a stable store of wealth. Bitcoin is almost six times more volatile than US equities and 18 times more volatile than the US dollar. Also compare this to the change in the value of risk-free bank deposits, or cash investments, which have zero volatility since they are held at par (ie, not marked to market).

For as long as bitcoin has been soaring in value given zero cash interest rates and huge fiscal injections of money into household balance sheets, the upside volatility was tolerable. But the downside risk has recently come home to roost. Depending on the timing, investors could face losses of 40-50 per cent over the past year.

To compound these concerns, bitcoin, and other correlated cryptocurrencies, appear to be trading not as inflation hedges, but rather as simple equity risk proxies. In the last year, the correlation between bitcoin and US equities has jumped to north of 50 per cent.

In big risk-off moves, such as the savage recent US equity market correction, the correlation appears to be almost perfect. Since the equity losses have been triggered by fears of higher interest rates to quell inflation, bitcoin has been behaving as an inflation risk amplifier rather than a mitigant.

When positive interest rates finally reappear on risk-free cash deposits, this will significantly increase the opportunity cost of switching into crypto, undermining its demand. This demand will have also been materially dented by investor experience with the recent downside risk.

Many investors believe that one possible solution to the crypto risk problem is diversification. They accordingly hold a range of other cryptocurrencies. Yet bitcoin and other digital currencies are proving to be highly correlated with both equities and themselves. The correlation between bitcoin and ethereum has averaged around 75-85 per cent. Put differently, loading up on crypto appears to be just another form of equity-related risk.

For all the hope and promise of crypto acting as a viable medium of exchange, we have yet to see its widespread take-up. We rely almost exclusively on electronic cash protected by the government-guaranteed banking and payment system, and the associated credit card oligopoly. Pioneering countries like El Salvador that adopted bitcoin as legal tender have run into financial problems as a direct consequence, which will likely deter others.

And slowly but surely, nation-states are predictably moving to crush unregulated crypto threats to their currencies and payments/banking systems, often on the basis of claims that crypto is being used by criminals and terrorists as an anonymised medium of exchange. China banned crypto in 2021 and Russia is proposing to follow suit. In total, more than 42 countries have explicitly or implicitly banned digital currencies.

There are doubtless many important technology innovations, such as blockchain, that have been developed as part of the crypto ecosystem. These innovations may endure and become immensely valuable over time.

Yet, the cryptocurrency craze appears to share some commonalities with the great tulip bulb bubble in the 1600s.

Finally, for those who are hoping to rely on the central bank put option to bail out equities and hence crypto, this time is different. Since late 2021, we have argued that the advent of high inflation means that this put option is temporarily dead.