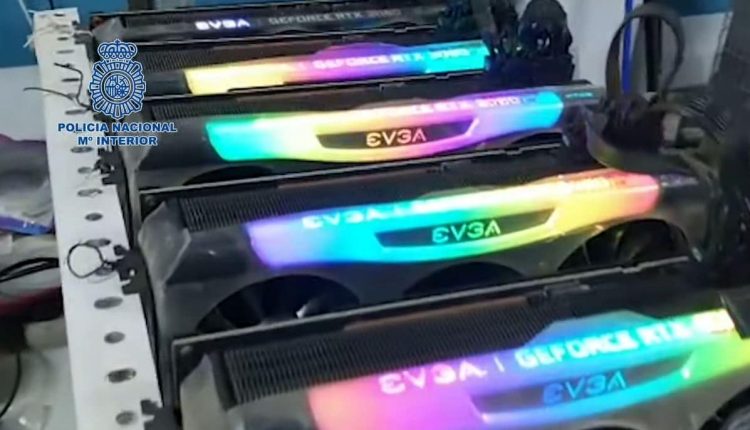 Santiponce, a province located in Seville, Spain, authorities found the crypto mining setup. Officers were aware of the location due to discovering the illegal electrical attachment from the building. Upon entering the facility, they found the digital currency mining devices, robust cooling and ventilation systems, and EVGA RTX 30 series graphics cards implemented into the mining rig designs. Some of the cards are the EVGA RTX 3080 series.

Bitcoin Has Crashed – But Will GPU Shortage Finally Ease Up?

Police investigations began on a possible indoor marijuana plantation that could be located in some stables located in Santiponce. After carrying out the first inquiries, the agents realized that the existing indications did not correspond to the cultivation of marijuana, but rather that these facilities could be hosting a cryptocurrency farm of which there are hardly any records in Spain.

With this information, the stables were entered and searched, where the agents discovered modern facilities for mining cryptocurrencies. In this place, 21 ASIC teams intervened, dedicated exclusively to Bitcoin mining, estimating their approximate value above 31,500 euros, and calculating that they could provide a monthly profit of 2,500 euros. A RIG mining equipment was also found, also used for mining cryptocurrencies, which could have an approximate value of 13,000 euros and could generate profits of 1,000 euros per month.

The report from the agents of the Spanish Police force described that authorities seized equipment worth $55,816.03. There is a rumor that the crypto mining technique under design was forging at least $2,790.18 of earnings for the unknown number of users involved.

Outside the building, an unauthorized connection to the electricity network was found to power the equipment, marking a highly-elevated amps consumption. According to specialists from the electrical company, the factory could yield a monthly electricity deception of up to 2,000 euros.

Lebron James teams up with Crypto.com for education project

Is Rapids (RPD) Worth the Risk Friday?