What do blockchain, NFT, DAO and crypto mean? | TechCabal 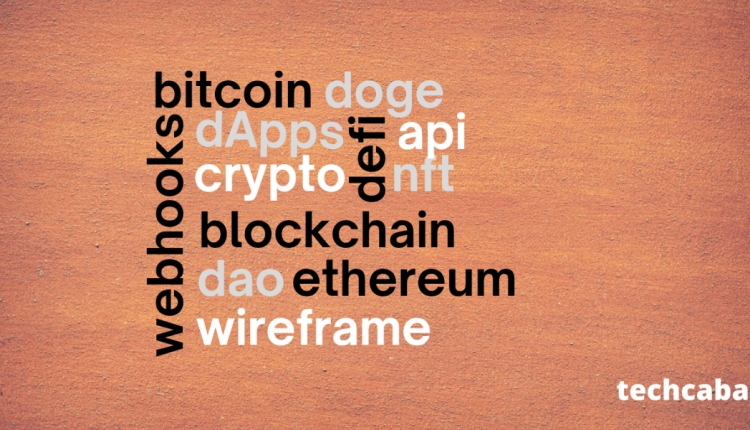 Do you need a guide for all the big tech terms people are throwing about on the internet? What do blockchain, NFT, DAO and crypto mean?

Over the past couple of years, there’s been an influx of words that explain certain tech concepts. Some of them like crypto, or even NFTs, have been around for a while. In fact, NFT—as a word—was first used in 2014 and now, 7 years later, it’s still a concept that escapes a lot of us. Others like DeFi or DAOs are fairly new, but they’re still getting thrown around a lot.

Whether you’re new or old to tech, reading about concepts can feel like learning a new language. So TechCabal is creating a guide—short explainers—for common tech terms. In this, you’re sure to find simple short explanations that can help you understand NiFTy concepts.

A few of the concepts we’ll explain here are based on blockchain so it’s important this goes first.

Blockchain is a record-keeping tech that’s designed to make it impossible to hack the system or forge the data stored on it.

How it works: Standard databases store data in rows, columns and files, but blockchain stores data in blocks that are chained together. The data on the blocks are continuously updated, encrypted, and stored on several computers so there’s no single computer to hack or control the data from.

In explaining blockchain, Buchi Okoro—CEO and co-founder of African cryptocurrency exchange Quidax—said: “Imagine a book where you write down everything you spend money on each day. Each page is similar to a block, and the entire book, a group of pages, is a blockchain. With a blockchain, everyone who uses a cryptocurrency has their own copy of this book to create a unified transaction record. The software logs each new transaction as it happens, and every copy of the blockchain is updated simultaneously with the new information, keeping all records identical and accurate.”

We all know what currencies are—dollars, pounds, shillings. Well, cryptocurrencies are digital currencies. You can’t hold it the way you’d hold fiat currencies like CFA coins or naira notes, but you can still spend it on things you love.

How it works: Cryptos are digital currencies created on blockchain technology. If you got a sense of what blockchains are, then you’ll understand what we mean when we say that cryptocurrencies are decentralised; no one person or government controls them. They are created by algorithms and used to award engineers—called miners—who carry out maintenance on the blockchain.

Don’t be fooled by its mushroom-sounding title, NFTs are in fact inedible, even the NFT flavours. NFTs are unique digital assets created on a blockchain.

How it works: To put it simply, NFTs are digital works that exist on blockchain. They can be images, sounds, game skins, or even clothes for your digital avatars. These digital works are impossible to duplicate or forge; they’re one of a kind and that makes them valuable. If you’re asking yourself why a screenshot of an NFT isn’t as valuable, it’s because NFTs have been embedded with code which is what makes them exist on the blockchain.

Think of it this way, when you go to a museum and take photos of artefacts, what you have is just a photo which isn’t quite valuable. The museum still has the original valuable artefact.

It’s similar with NFTs. We can take screenshots of Niyi Okeowo’s $2,800 Indigo Child (below) but it doesn’t mean we own the asset. The original copy—the property rights and certificate of authenticity—belong to the buyer.

You’ve probably seen tech bros throw the word “Web3” around a lot. It’s the answer experts give to questions from “What is the future of the internet?” to “What does Spiderman navigate the internet with?”

But what exactly is Web3? To put it simply, Web3 is taking democracy to the internet.

Let’s take a look at Web3’s ancestors, Web1 and Web2, so we can understand what it’s all about.

How Web3 works: Web3 will be built on the blockchain working independently from different parts of the world.

On Web3, decisions regarding the design and operation of products and funds—including crypto—will be made by communities of people called Decentralised Autonomous Organisations (DAOs), and not governments or companies. So if you find an app or product you like, you can join the DAO of that product, buy shares and vote on which changes should be made.

For example, if you joined TechCabal’s DAO, you’ll get to decide how we upgrade or downgrade depending on how much shares you have in the DAO.

DAOs or Decentralised Autonomous Organisations are social communities that will create rules and regulations which will be embedded in programming codes.

How it works: Unlike conventional organisations like TechCabal, which have managers and boards of directors that govern it, DAOs are governed by communities—who don’t have to be developers of the product. DAOs are created by developers who decide on a set of rules and embed it in—digital contracts on blockchain that are executed when certain conditions are met.

The communities decide what happens to the products attached to that DAO, what upgrades to make and when to make it. Each DAO will have its own token which will be sold to its community members, and the more tokens you have, the heavier your stake and voting rights.

Get the best African tech newsletters in your inbox

Explained: What does money look like in the metaverse?