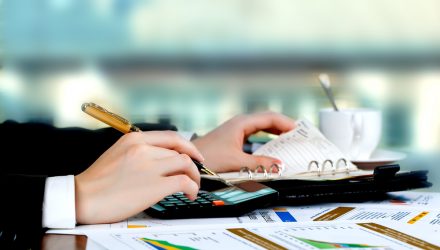 Markets ended last year volatile and have had a difficult start to this year thus far; the S&P 500 is down 8% after recording a high on January 4, highlighting the extremity being seen in both market volatility and investor sentiment, writes Mark Hackett, chief of investment research for Nationwide’s Investment Management Group.

The current decline is modest looking back historically, similar to ones that happened in February, September, and November of last year, and drawdowns similar to what is being experienced now have happened many times for the S&P 500. Looking back since just after the financial crisis that concluded in 2008, the S&P 500 was down 27 times with drawdowns of 5% or more, averaging two per year, while bigger corrections were much less common. 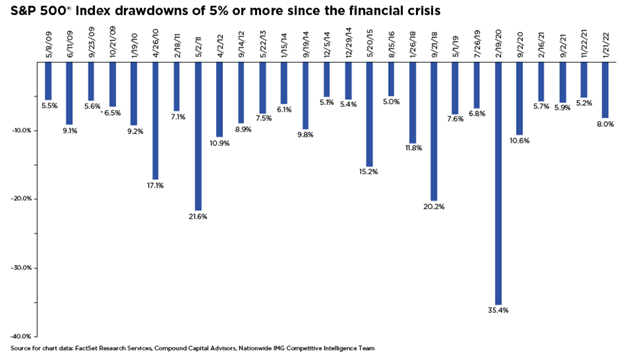 Large corrections in markets of 10% or more have only happened eight times since 2009, Hackett explains, and were sparked by events such as the European debt crisis, the U.S. credit downgrade, emerging market concerns, a slowdown in China along with rising rates, and the onset of COVID.

“It’s too early to determine if the current drawdown is simply noise following a strong year in 2021 and some developing uncertainty, or if the decline is more pervasive,” Hackett writes. “Catalysts in the market have shifted from positive to negative, while the S&P 500 still trades at an elevated level of 20-times forward earnings. The market internals paint a more bearish story, with the average company in the S&P 500 down 15%.”

Markets remain volatile while investors continue to be uncertain about the economic outlook going forward and earnings growth. Everything seems poised for a positive catalyst to send markets rebounding, but Hackett doesn’t believe that will come from either monetary or fiscal policy, or earnings reports for the time being.

“A rebound in the economy, with improving consumer demand after the peak in Omicron cases and moderating inflation, is the most likely positive catalyst, although the timing is uncertain. Stock markets will likely remain volatile until that occurs,” Hackett explains.

‘I made $4m profit on crypto, but the bank won’t let me spend it’

What is Etherscan, and how does it work?