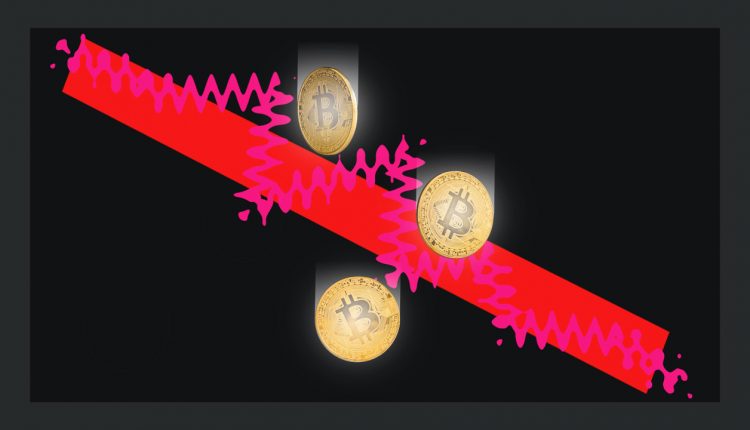 It’s been a dramatic and trying week for the crypto faithful.

The crypto sell-off may have been triggered by rumors that the U.S. government will soon regulate digital currency. The market may also have been reacting to the same thing that caused a sell-off in the stock market—fears that the Federal Reserve will soon raise interest rates. Adding to the anxiety is the current geopolitical instability in Europe caused by a possible Russian invasion of Ukraine.

As some pointed out this week, buying crypto is placing a bet on the future acceptance of the currency itself. That in part explains the dramatic upswings and downswings in the price of Bitcoin and other cryptocurrencies. Stock prices are subject to shifting beliefs about the market, but their price is stabilized somewhat by their relation to the financial performance of the issuing company.

Some pointed out that this week’s sell-off is far from the first and won’t be the last.

The Qubit incident was a breach of a private exchange, not of the blockchain itself. Many people won’t make that distinction.

“Even though Bitcoin has been declared dead in the mainstream media more than 400 times, it keeps coming back,” Alex Tapscott, managing director of the Digital Asset Group at Ninepoint Partners, said in a statement Thursday. (This week Sohale Andrus Mortazavi, writing for Jacobin, declared cryptocurrencies to be a “giant Ponzi scheme.”) “Indeed, with each market cycle Bitcoin has returned to hit a new high in price and total market capitalization.”

At least this week the fall of cryptocurrency prices did track with the fall of stock prices, including tech stocks. On Wednesday, Jerome Powell, chairman of the Federal Reserve, did the markets no favors by hinting that an interest rate hike is likely on the way, although he gave no clue of the extent of the increase or when it might come. Powell is focused on slowing down the booming economy as a way of controlling inflation.

Meanwhile, millions of crypto owners and would-be buyers wondered whether now is the right time to “buy the dip” in the currency’s price. The price of Bitcoin has been hovering around $37,000 since dropping to $33,113 on the 24th.

On Tuesday the Federal Trade Commission issued a report saying that social media-based fraud grew 18-fold in 2021. More than a third of the scams were investment offers, the agency said, and many of them involved crypto. “People send money, often cryptocurrency, on promises of huge returns, but end up empty-handed,” the report said.

Then on Thursday, news broke that the Biden administration is about to order federal agencies to create regulations for digital currencies, including Bitcoin, as well as NFTs (nonfungible tokens). The Biden White House sees cryptocurrency as a matter of national security, Barron’s reports.

Finally, late on Thursday, the Qubit decentralized finance platform confirmed reports that a hacker (or hackers) had stolen $80 million in crypto. Qubit, which lets users speculate on cryptocurrency price variations, has now found the blockchain location of the stolen crypto and is offering the hackers a bounty in exchange for its safe return.

The Qubit incident was a breach of a private exchange, not of the blockchain itself. Many people won’t make that distinction. It will be seen as the last in a weeklong string of events that had degraded confidence in crypto generally. But for many of us standing on the sidelines with crypto FOMO, this was a week to feel relieved about what we missed out on.