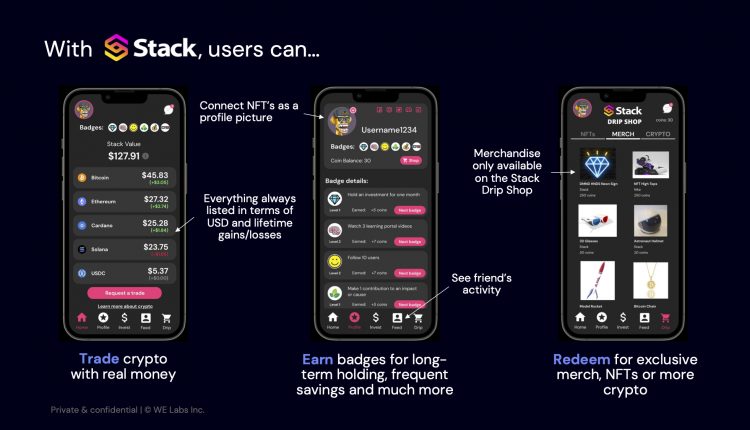 Cryptocurrency is increasingly going mainstream, but not everyone is familiar with or using the emerging tech. That group includes young adults.

Enter Stack. The Seattle-based startup is building a crypto platform for teenagers and others disenfranchised by the financial system.

The company, which recently joined a fintech incubator in Seattle, recently closed a $500,000 pre-seed round from On Deck and Santa Clara Ventures.

Stack originally built a product designed to streamline investment giving, according to CEO Will Rush. But it pivoted after finding that investment gifts were overwhelmingly directed toward teens, and that there was no way to give cryptocurrency to those under 18 years of age.

After going through various legal and compliance diligence, Stack in March will launch a gamified platform that allows teens to invest in cryptocurrency. Parents co-own the account if the user is under 18. Users earn social and merchandising rewards for responsible investment activity and for watching educational videos.

If it was, he said, “I think the amount of long-term investors in the stock market or crypto market would be so much higher because they wouldn’t be afraid of it.”

A recent CNBC/Momentive Invest in You survey found that 48% of Americans between the ages of 18 and 24 hold no investments of any kind. Of that group, 27% said they had never invested because they don’t know how to.

Rush said that Stack is “building for anyone who doesn’t come from a family with significant investment history.” That’s one way Stack separates itself from other crypto platforms such as Coinbase, he said.

While Coinbase is building beginner guides and educational tools, “it doesn’t solve the inertia problem for new investors,” Rush noted.

Rush said the app is “educating in a sneaky way,” through fun, relatable 90-second videos and awards for saving and diversifying holdings.

A study by the Investor Education Foundation found that those who took high school financial literacy courses had better credit scores and lower debt delinquency rates. The Brookings Institute found a positive correlation between financial literacy, asset accumulation, and net worth by age 25. Stack aims to take that literacy training out of the classroom and into a more engaging and enjoyable setting.

While there are stock investment apps directed at teens, few if any focus on the under-18 age group.

Stack makes money from subscriptions, which range from $2-to-$3 per month. When compared to other platforms which charge by the trade, the subscription cost offsets if three or more trades are made in one year, Rush said.

After working eight years at Deloitte, Rush was a venture fellow with Seattle-based Fuse Venture Partners. That’s where he connected with one of his mentors, Eddie Behringer, who founded teen banking app Copper, which helped provide inspiration for Stack.

While Stack is aimed at teens, the platform could appeal to college students and young professionals as well, many of whom lack both investments and financial literacy education.

Why is my Bitcoin transaction unconfirmed?