Analysis: The Beijing Olympics won’t be the splashy launch China wanted for its digital 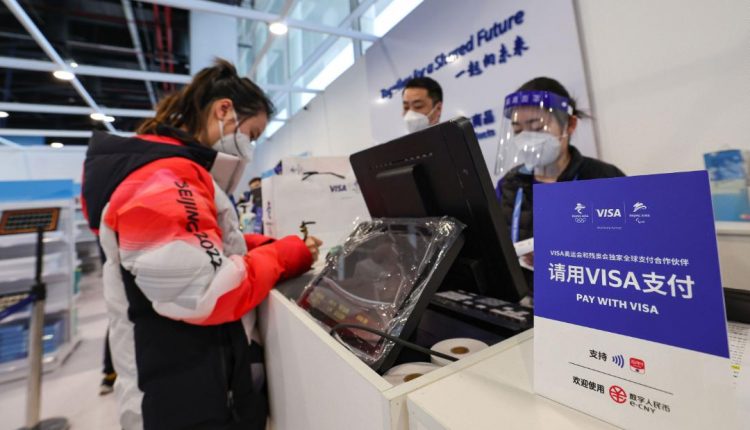 China is already on the verge of becoming a cashless society, but the vast majority of those electronic transactions happen on privately owned apps, outside of the immediate purview of the state. An official yuan would change that, giving Beijing an unprecedented amount of information about what people are spending their money on and where.

The world’s second largest economy has been trialing the digital yuan in Chinese cities for the last two years, as it prepares for a national rollout that could put China ahead of Europe and the United States in the global race to develop a state-backed digital currency.

The timeline for that nationwide launch has yet to be decided, but Beijing almost certainly intended the Olympic Games to be an important milestone on the road to widespread usage.

Beijing has been pressuring businesses — including big Western companies such as McDonald’s (MCD) and Nike (NKE) — to allow customers to use the digital yuan during the games. The digital version of the currency is one of only three payment choices foreign athletes and others have at sporting venues and the Olympic Village, aside from cash and Visa payments. And last year, Beijing said it would make it easier for foreigners to use the digital yuan during the Games by giving athletes ski gloves and smart watches with built-in payment functions, and scrapping a requirement to open a local bank account if they wished to use the currency.
As the event approaches, though, those efforts may land with a thud. Beijing is barring most fans from attending the Games, and has constructed an elaborate quarantine “bubble” to separate Olympians, officials, journalists and support staff from the rest of the city as fears of coronavirus outbreaks persist. Western lawmakers are also warning their athletes against using the digital yuan over mistrust of the Chinese government, including spying concerns.

“The Olympic Games would have been the first real chance for tourists and Chinese nationals alike to familiarize themselves with the digital yuan, but that door slammed shut when the Chinese government decided to severely restrict the number of Olympic spectators,” said Craig Singleton, senior China fellow at the Foundation for Defense of Democracies, a DC-based research institute.

“That decision alone, more than anything else, will likely further delay the mass adoption of the digital currency.”

Chinese companies and government officials have been touting the Games as an opportunity for the digital yuan in recent weeks, even as it has become obvious that attendance will be minimal.

“Launching the digital yuan at a big party like the Winter Olympics can showcase China’s latest fintech achievement to the world,” Li Xin, chief business manager at Bank of China’s (BACHF) digital yuan unit, told the state broadcaster earlier this month. The state-owned bank is the official banking partner of the Beijing Games.
Several factors are making widespread adoption difficult. Authorities have created one of the most complex Covid quarantines ever attempted. Known officially as the “closed loop system,” the restrictions will apply to some 11,000 people from around the world, sealing them off from the wider Chinese population.

Anyone — Chinese or foreign visitor — who isn’t part of that system are barred from attending the Games at all, further limiting the scale of the spectacle.

Political tensions could also complicate the situation. Last July, three US Republican Senators urged the US Olympic and Paralympic Committee to forbid American athletes from “receiving or using the digital yuan during the Beijing Olympics.” The committee didn’t publicly respond. But it has reportedly advised US athletes to bring disposable or burner phones to the Olympics in China because of possible surveillance, the Wall Street Journal reported earlier this month. Several other countries, including the United Kingdom and Canada, have offered similar advice to their athletes, according to Reuters.

Even if many of the people who do attend the event use the digital yuan, “it won’t make a significant dent in overall transaction levels,” said Scott Kennedy, senior adviser and trustee chair in Chinese Business and Economics at the Center for Strategic and International Studies.

The digital yuan is already struggling to gain traction within China. Transactions using the currency totaled just $8.37 billion in the second half of 2021, equivalent to $1.4 billion per month.

Ant Group, for example, revealed in 2020 stock exchange filings that its Alipay app processed $1.6 trillion on average each month — more than a thousand times the digital yuan’s monthly transaction volume.

After initially limiting usage of digital yuan wallets to winners of a lucky draw, the Chinese government has been making it easier for the public to try the virtual money. At the start of this year, for example, the People’s Bank of China released a wallet app on Apple and Android stores that can be used in 10 cities and regions that are piloting the currency, along with the Olympic venues. That pilot app is now available to everyone in those areas, not just the lottery winners.

The central bank has touted surging numbers among its trial users last year as a sign of the digital yuan’s success. By the end of December, the app had been downloaded by 261 million individuals, or 19% of China’s population, according to central bank data.

But there are still barriers to use the money, too. Outside of the Olympics exemption for foreigners, people who want to trade with digital yuan need to download and sign up for the central bank app, and then add money from their accounts at one of the designated Chinese banks.

The currency also can’t be used outside of the 10 cities and regions that are piloting it, along with the participating Olympics venues.

Consumers appear to have an “unwillingness to embrace” the currency right now, according to Frank Xie, a professor at University of South Carolina Aiken who studies Chinese business and the economy.

Experts cited a lack of incentives as a major reason for the lack of enthusiasm.

“The ecosystems that have been built now for a decade around the big tech firms are unbeatable in terms of network and convenience,” said Martin Chorzempa, a senior fellow focusing on Chinese financial innovation and technology at the Peterson Institute for International Economics. After all, industry leaders Alipay and WeChat Pay already have hundreds of millions of users who are familiar with their services.

“The payment experience does not tend to strike most users as any different or better than what is already on offer,” he added.

Xie also suspected that concerns about a loss of privacy could be a factor, adding that “even ordinary citizens” have come to realize the reach of the government’s power.

The government does have some options for pushing consumers to change their spending patterns, according to Singleton of the Foundation for Defense of Democracies.

“Overtime, it is possible people could see increased adoption of the digital yuan to pay for certain expenses, like utility bills, transportation or other government-managed bills, simply because the government could force those changes upon consumers,” he said.

Analysts have also raised the possibility that the government could request that privately owned apps actively promote the state-backed yuan. That’s already starting to happen: Alipay began trialing digital yuan payments last year, and Tencent said earlier this month that it would also start supporting the digital yuan in its WeChat Pay wallet.

“In effect, you are asking these providers to potentially cannibalize their own systems by allowing customers to use the digital yuan instead of their own existing payment options,” said Kimmo Soramäki, founder and CEO of London-based analytics firm Financial Network Analytics.

Those companies might feel as if they have little option, though. China’s push into digital currency dovetails with its regulatory crackdown on Big Tech. Ant Group and Tencent (TCEHY) have been under intense scrutiny, and were forced to either overhaul their businesses or pay big fines as Beijing sought to curb their power.

“The rollout of future versions of AliPay and WeChatPay [is] likely to be forestalled, which in turn will limit the power wielded by these major tech firms,” said Singleton, who added that the government is hoping that its regulatory hurdles will allow the digital yuan to “overtake these other payment systems.”

However, Beijing eventually secures wider adoption of its state-backed digital currency, there does appear to at least be one certainty: The Beijing Winter Olympics isn’t shaping up to be the stage for digital yuan bragging rights that authorities might have hoped for.

Read More: Analysis: The Beijing Olympics won’t be the splashy launch China wanted for its digital

Can You Make a Career Out of Cryptocurrency? – The Video Ink