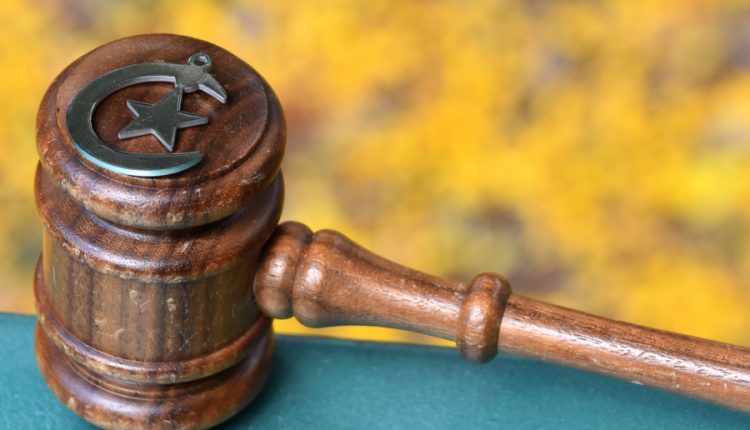 Cryptocurrencies have been catching on quickly around the world, and Indonesia has been no exception. According to data from the Ministry of Trade, crypto trading is booming in the country, with daily transactions in July 2021 reaching IDR2.3 trillion (USD161.7 million). All it needs to get started is a smartphone, an internet connection and a localised crypto trading app.

In November, the trend was set to change as the Indonesian Ulema Council, a top body of religious clerics, ruled that cryptocurrencies are haram (forbidden) due to their uncertainty and capacity for potential harm.

Although it is not the first time the council has issued a controversial fatwa (a ruling on a point of Islamic law by a recognised authority), the ruling raises an alert for the more than 235 million Muslim population in the country.

Those unfamiliar with Islamic finance principles may not be surprised to learn that, as per any doctrine based on religious thought, certain morals are involved, a little like socially responsible investing that has become popular in the West for those not absorbed completely in personal gain.

The World Bank describes Islamic finance as “equity-based, asset-backed, ethical, sustainable, and environmentally and socially responsible”, adding it espouses these key principles: (1) prohibition of interest on transactions (riba); (2) financing must be linked to real assets (materiality); (3) engagement in immoral or ethically problematic businesses is not allowed (e.g. arms manufacturing, gambling or alcohol production); and (4) returns must be linked to risks.

In addition, each jurisdiction that adopts Islamic finance will have different interpretations.

“Before assessing the impact of the fatwa from the Ulema Council, we note that Indonesia’s legal system is based on legal pluralism, in which multiple legal systems are recognised including civil law, traditional or adat (local customary) law, and Islamic sharia law,” says Denny Rahmansyah, partner at SSEK Legal Consultants in Jakarta and an Islamic law specialist.

“Typically, fatwas can be seen as positive law, but they are not always legally binding on all individuals, so there is no legal obligation to abide by issued fatwas.” 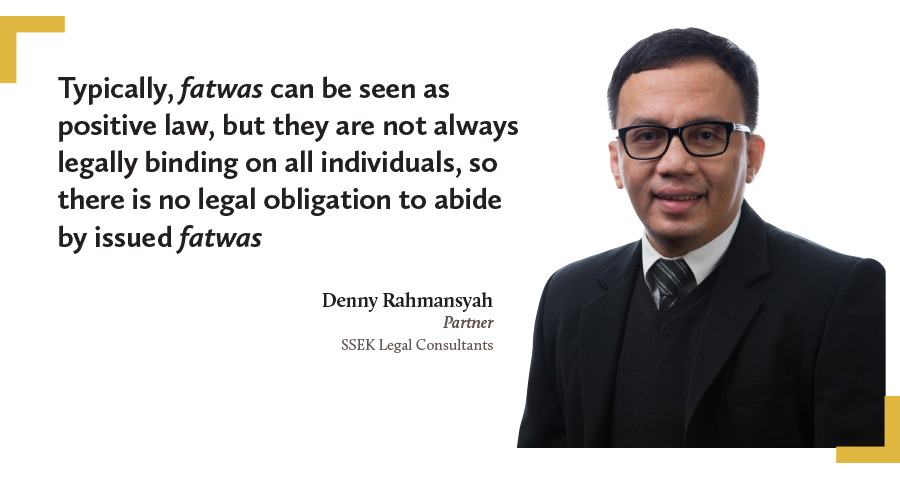 The exception is, Rahmansyah says, when a fatwa issued by the council is then codified into law and becomes state legislation. For example, the sharia principles found in Indonesia’s sharia banking regulations are based on fatwas issued by the Ulema Council, which were then incorporated into the central bank’s regulations and Law No. 21 of 2008 regarding sharia banking. Other main regulations applicable to the sharia economy are laws on halal (lawful) products, zakat (charity), and waqf (property endowment).

K&K Advocates’ senior associate, Bhredipta Socarana, says the latest fatwa prohibits the selling and purchasing of cryptocurrencies because, according to sharia principles, an asset should have a physical form, real value, an exact known amount, ownership rights, and be transferable to the buyer.

“If the said cryptocurrency meets these conditions, it is exempted from the fatwa,” says Socarana. “However, we do not see such a ruling would affect crypto markets or the Indonesian public’s position on cryptocurrencies; crypto assets are gaining more interest from the public.”

Andreas Hartono, a senior partner at Andreas Sheila & Partners, also sees the fatwa as unlikely to impact crypto trade in the country significantly unless it is adopted into state legislation to be legally binding. Such a move would be a massive blow for 6.5 million crypto investors in Indonesia, according to the Ministry of Trade’s data as of May 2021.

“Most of these crypto investors are estimated to be between 18 and 34 years old,” says Hartono. “On the other hand, the central bank continues to work on, and will speed up, its preparation for the introduction of its own digital currency, which is essentially also a digital asset.”

The devil you don’t know

Despite being relatively new, the number of crypto investors in the country has surpassed the total number of investors in the Indonesian Stock Exchange, about 6.4 million, as of September 2021. Vincent Lie, a partner at Makarim & Taira S, says that the rapid increase is mainly driven by the historical chart of a high return against fiat currency, which also comes with a high risk of losing value.

“Younger generation crypto investors are driven by fear of missing out, and a strong belief that eventually crypto will replace fiat currencies, particularly with the development of the Metaverse, blockchain and web 3.0 generation,” says Lie.

“As it is very difficult to grasp … the fundamental movement or volatility of the value of a specific crypto asset, investors must consider the importance and urgency of the funds being used to invest in cryptos. For example, to avoid investing in cryptos by using emergency funds or funds obtained from a loan from banking or financial institutions.”

Since 13 January 2018, the central bank, Bank Indonesia, has acknowledged cryptocurrencies but not recognised them as legitimate payment instruments. Bank Indonesia has prohibited all payment system and financial technology operators, including banks and non-bank institutions, from processing transactions using cryptocurrencies.

“In Indonesia, the crypto assets, including cryptocurrencies, are recognised as a commodity, which can be traded through futures exchanges under the supervision of the Commodities Futures Trading Supervisory Agency (Badan Pengawas Perdagangan Berjangka Komoditi, or Bappebti) under the auspices of the Ministry of Trade,” says Lie. 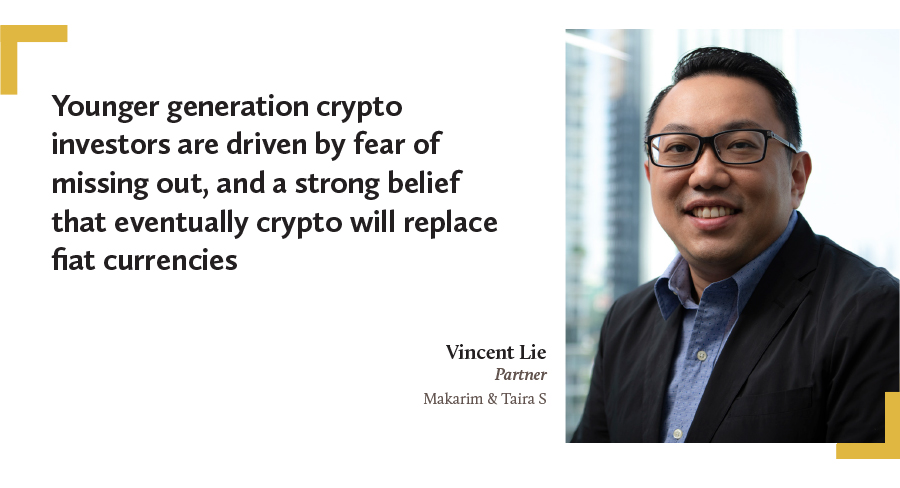 With the changing landscape in digital assets, Hartono, of Andreas Sheila & Partners, observes more and more entities raising funds through initial coin offerings (ICOs), as it is relatively easy and yet to be regulated. This could entice crypto players in Indonesia.

“Such ICOs were mostly conducted in more crypto-friendly countries (Singapore, Malta, etc.) but they targeted Indonesian businesses and individuals as their potential investors thanks to the peer-to-peer nature of the crypto industry,” he says.

Although Indonesia has no regulation on ICOs, the direct solicitation to subscribe to the coins or tokens offered during an ICO through e-mail blast, social media or other platforms may attract Indonesia-based investors.

“Currently, there shall be no legal protection for Indonesian investors when they invest or participate in any ICO of any digital assets,” says Hartono.

Among thousands of cryptos globally, only 229 crypto-assets were approved by the Bappebti to be traded in Indonesia. These assets must compete against each other to gain traction, and improve their relevance in the crypto world, otherwise they will vanish over time.

“Some of them deploy an aggressive marketing strategy without improving the fundamental aspects of their coin or token, which creates hype and volatility in the short term but may create loss to the public investors in the long term,” says Hartono. “It is important for businesses and individual investors to assess the fundamental aspect or use cases of the relevant crypto assets in which they want to invest before deciding to invest in any particular digital asset. Without understanding the fundamental use case, they are basically gambling instead of investing.”

The volatility and uncertainty brought by cryptocurrencies might well fuel growing concerns in a country trying to boost its sharia economy. In December 2019, the government proposed a bill on the sharia economy that aims to harmonise the social functions of its Islamic finance. The bill has been included in the national legislation programme, which lists bills to prioritise in 2022.

The country has been ramping up its initiatives to strengthen the sharia economy and finance ecosystem. The government launched the Indonesian Sharia Economic Masterplan for 2019-2024 to stimulate rapidly developing sharia economic regulations.

However, the country has a lot of homework to do. Adryan Tando, an associate at Andreas Sheila & Partners, points out that despite government efforts to increase the role of the sharia economy, a 2021 Fitch Ratings report titled Improving outlook for Indonesia’s sharia banking sector shows the market share of shariah banking was only 7% of the total industry in 2020.

“This is still a small and limited market for us, the legal profession, to share,” says Tando. “At this stage, we have yet to see any Indonesian law firm that dedicates their practice to this industry. However, this could be the next potential business opportunity once the market share grows.”

Socarana, of K&K Advocates, agrees that Indonesia was considered relatively late in paying heed to Islamic economics. The central bank’s national Islamic economic literacy index in 2019 reached only 16.3%, which means that out of 100 Indonesian Muslims, only 16 people understand Islamic economics and apply it in their daily lives.

However, these figures are expected to expand…

Play-to-Earn for beginners: The revolution is upon us.