Have NFTs jumped the shark? 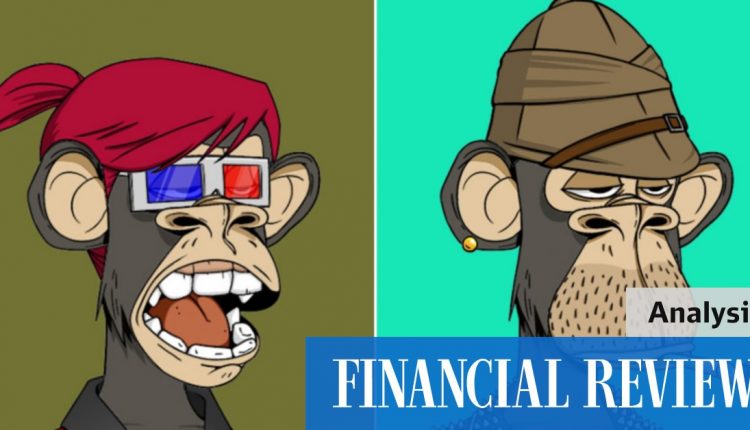 “It’s gone ballistic, and yes, the tech’s great, but there’s so much dumb money flowing in there that’s about to be wiped out in many ways.”

An NFT is a tradeable code attached to a digital item, such as an image.

A secure network of computers records the sale on a digital ledger, giving the buyer proof of authenticity and ownership.

While useful to signify the uniqueness of something on the internet, this technical innovation has spawned billions of digital assets marketed as exclusive tickets to events, equity in yet-to-be-developed crypto projects, as well as rare collectable items that form part of art portfolios.

Crypto traders have leapt into the nascent market, driving up the prices of these digital assets and spruiking the value of their NFTs in chat forums in a bid to eke out more price gains.

Brands have also got in on the action, selling NFTs in the same way they would sell exclusive products and generate hype. Early in January,  the Australian Open sold a suite of NFT tennis balls, banking around $1.3 million.

But without regulation around who can mint and sell NFTs, investors are buying digital assets with no protection and rely on the self-governance of platforms and exchanges to arbitrate scams.

Over the weekend, OpenSea, a popular NFT marketplace, was forced to reimburse $1.8 million to users who, due to a bug in OpenSea’s code, accidentally sold valuable NFTs below their going market rate.

A few hours later, the platform reported that more than 80 per cent of NFTs minted through its free creation tool are spam, scams or fraudulent.

“Because you can infinitely create these scarce assets, with everyone coming up with new concepts, but it’s a pure free market, so you’ll see lots of strange activities.”

Woodward, who says he is backing NFT and the metaverse for the long term, says the underlying technology is only just finding its feet.

Until then, market behaviour is likely to be irrational, he warns.

“You’ll get rational and irrational actors interacting and there will be a lot of breakage,” he said.

As it stands, the characteristics of NFT markets remain entirely sentiment driven, with early adopters of high-profile NFTs fashioning themselves as influencers.

Using Discord, Reddit and other online forums, these influencers play the role of “tastemaker”, often broadcasting which NFT “drops” will be highly sought after.

Last year, Tasmanian-based crypto influencer Alex Saunders sold nearly $80,000 of NFTs as tickets to an online party, only to disappear with the money.

Research company Chainalysis has reported cryptocurrency-based crime rose 79 per cent to $US14 billion in 2021.

Despite high-profile scams and “rug-pulls”, where the issuer of an NFT makes off with investor money, NFT trading volumes have reached fever pitch.

However, the value of the vast majority of NFTs, or the projects they purportedly represent, is likely to collapse, says de Wet, who places NFTs at the “peak of inflated expectations” on the technology adoption curve.

“There’s going to be a shift in how people view these kinds of assets,” says de Wit, who puts the NFT bubble collapse somewhere in the next 12 months.

“But the question is, who’s the marginal buyer? Who’s going to be left buying NFTs at these elevated prices?”

5 Tips To Help You Avoid A Scam Blockchain Project | Benzinga