Why It Matters: Cryptocurrencies showed resilience after minutes from the January Federal Open Market Committee indicated that the U.S. Federal Reserve was readying to combat the steepest rise in prices since 1980.

“Most participants noted that, if inflation does not move down as they expect, it would be appropriate for the (Federal Open Market) Committee to remove policy accommodation at a faster pace than they currently anticipate,” as per the minutes, reported by Reuters.

Edward Moya, a senior market analyst at OANDA, said that Bitcoin is trading like a risk asset and will continue to take its cue frm the market.

“Bitcoin should continue to attract investors as long as the $40,000 level holds over the short-term.”

Moya’s colleague Craig Erlam said the apex coin continues to look “very healthy” after weathering the recent geopolitical storm and is beneffitting from the return in risk appetite on Tuesday.

“Once again it finds itself trading a little shy of $45,500 where it ran into resistance last week after repeatedly seeing support there back in December. A move above here will be a big psychological boost and could propel bitcoin higher.”

However, Erlam too warned that risk appetite was important especially in the context of inflation and interest rates.

GlobalBlock analyst Marcus Sotiriou said the recent rally in Bitcoin was driven mostly by futures while spot was selling.

“We know this because the aggregated CVD [Cumulative Volume Delta] for spot has been stagnant whilst the CVD for futures has increased. This suggests that this price rise was driven by speculation or hedging rather than genuine demand.”

Past days, #Bitcoin has made a push, and some fear went away.

However, I still think that a break above $46K is crucial for any bullish perspectives.

Beneath that level, I’m remaining cautious.

Meanwhile, the decline in exchange deposits may indicate that Bitcoin liquidations are declining. 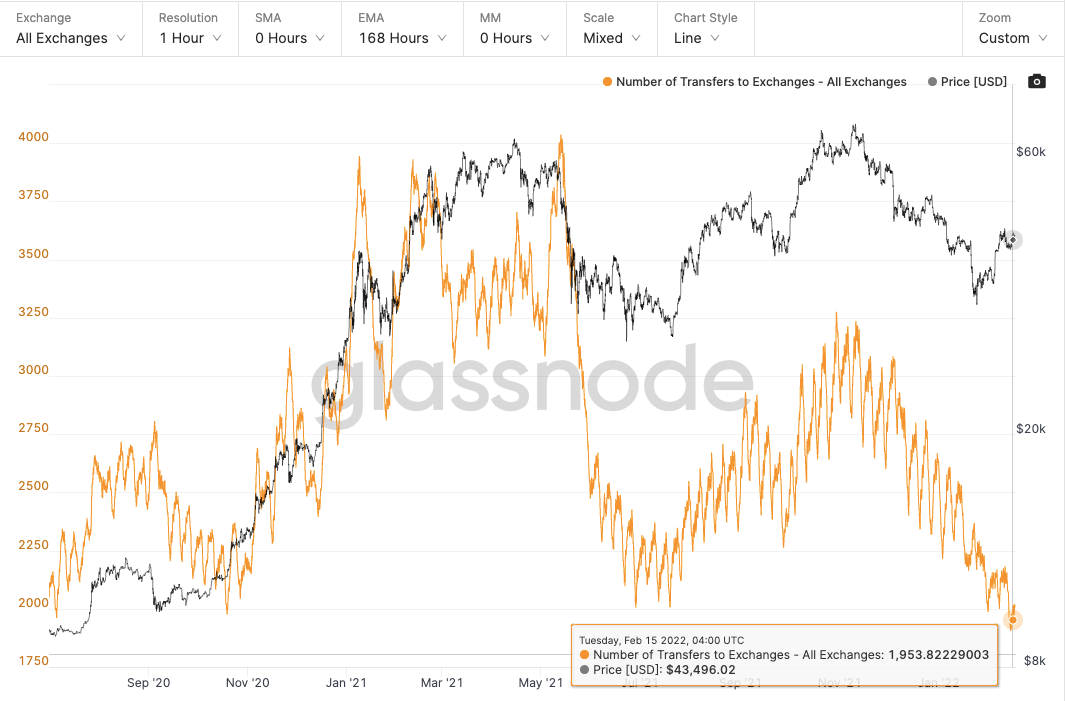 The heated debate over cryptocurrency mining in Ukraine