What Are NFTs and Should You Invest in Them? | White Coat Investor

When I first heard about NFTs, I thought it was a load of nonsense. I couldn’t understand what all the fuss was about, and I figured that the bubble would soon burst. But after doing some research and getting to grips with the underlying technology, I realized just how powerful this new phenomenon could be. So, the question remained: Should I invest in NFTs?

NFTs are essentially digital assets that exist on a blockchain. They can be used to represent anything from virtual currency to real-world assets like property or gold. And because they’re stored on a blockchain, they’re secure and tamper-proof. This makes them perfect for storing and exchanging value in a trustless environment.

I think we’re still only scratching the surface of what’s possible with them, and I think many people won’t want to miss the boat like the majority of us did with Bitcoin. So, without further ado, if you’re thinking about investing in NFTs, you should know what they are, the potential, the downsides, and if investing is a smart or risky idea.

First Things First, What Is an NFT?

When most people think of tokens, they think of cryptocurrencies such as Bitcoin or Ethereum, which are digital representations of money that can be traded on exchanges all over the world. However, there is a new type of token that is quickly gaining popularity called a non-fungible token, or NFT for short.

First off, what does fungible mean? Well, the word fungible means that the unit is interchangeable and NOT unique. Think of this like Bitcoin or the US dollar. They are completely exchangeable, and one dollar is just as valuable as another dollar.

Non-fungible items, though, are unique and cannot be exchanged for one another. No two items are the same. That brings us to NFTs, which are unique pieces of digital data, typically connected to a digital asset that is stored on a blockchain.

Think of an NFT like a digital “record” attached to an item. It’s written on a public ledger (blockchain) that can be seen by everyone, and this record contains all sorts of important information such as who minted it and every transaction thereafter.

Still confused? Here’s a scenario to help with the concept.

The NBA Top Shot sells NFTs tied to video clips of important moments for NBA players. This is like the modern version of selling baseball cards with one exception: authentication. You know you are purchasing an official NBA video clip because the NBA minted it on a public blockchain ledger, and every time the NFT resells, every transaction is completely visible. You’re not worried that this video NBA NFT is a forgery, because you can clearly see the transactions and the original minter. Now, how can you say with 100% certainty that no one forged your physical baseball card? You can’t.

The Blockchain Behind NFT

As a general recap, blockchains (like Bitcoin) are simply an online digital ledger. They work similarly to a bank, except the transactions are not stored in one centralized system but on a decentralized system accessible to everyone. For the purposes of this article, what’s important to know is what blockchain NFTs are minted on. If an NFT is minted on Ethereum, then that record of transaction will always be on Ethereum. You can’t move it to another blockchain like Bitcoin.

Ethereum was one of the first blockchains to adopt NFTs, and it has become the go-to platform for their development. In fact, there are now dozens of projects built on Ethereum that use NFTs to represent everything from digital art to real estate.

What can you attach to an NFT? Literally anything.

This makes them perfect for representing digital assets like artwork, music, and videos. NFTs are so versatile that they can even be used to represent physical assets like cars and houses. We’ll discuss this in more detail later. But first, let’s go into the different types of NFTs to illustrate the vast potential.

Here are some examples:

It’s important to know that the utility of NFTs is not limited to just digital artwork and memorabilia. NFTs are also sweeping their way into the entertainment industry.

Coachella, one of the US’s most famous music festivals, has introduced its NFT lifetime festival passes called “Coachella Keys Collection.” Collectively, the collection sold for over $1 million for 10 NFT packages.

The NFL partnered with Ticketmaster to sell commemorative NFT rewards to tickets. This opens a huge door for the future of selling tickets. Even Mark Cuban, the owner of the NBA’s Dallas Mavericks, has discussed NFTs and ticketing with his team. If ticketing went full-scale, think about how easy it would be to resell or purchase tickets on the secondary market? You’re no longer afraid of being scammed and purchasing a fake ticket, thanks to blockchain technology.

The digital world and metaverse are even hosting concerts by famous musicians (think Travis Scott concert on Fortnite). Overall, it’s still very early to predict what may happen, but it’s important to realize the possibilities.

If you haven’t heard of Decentraland, it’s literally an entire digital world. Meanwhile, Gucci, Burberry, and Dolce & Gabbana have all released NFTs that range from designer clothing for gaming characters to rewards during fashion week. It’s estimated to be a multi-billion dollar industry in the next decade, and companies love it because the profit margins are so much higher.

How to Display an NFT

Now that you understand the many different types of NFTs, the common question is: how do you use or display an NFT?

If it’s digital art or a collectible, NFT frames like TokenFrame are a great way to show off your NFT. Home decor will modernize with moving artwork—think of the moving picture frames in the Harry Potter movies. There are also now “video prints,” where you can show off collections like your NBA Top Shots.

Here are some examples:

Many people also show off their NFTs to their friends and family via their social media accounts. There are also emerging social media outlets specific for NFTs (think Instagram of NFTs).

Where to Buy an NFT

Once you have an NFT, you need a place to trade them. This is where NFT marketplaces come in, and there are now dozens of them.

OpenSea is going to be the most recognized platform, as it’s basically the Amazon of NFTs. As new marketplaces come up, they are starting to niche themselves out. Some marketplaces specialize in rare art while others are for the public.

How to Buy an NFT

Now that you know what NFTs are and where to find them, how do you buy them? You need to first buy crypto and then download a digital NFT wallet.

I think “digital wallet” is a poor term, as it doesn’t actually store your NFTs. It’s more like your debit card. You need a debit card with a pin to access your money from the bank. You also need an NFT wallet with a seed phrase to access your crypto to purchase NFTs.

How to Invest in NFTs

Now that you’ve got the basics down, you’re probably like me asking “Why on earth are people buying a $20,000 picture of an ape?” How can that hold any value? It just seems like a digital Beanie Baby craze.

But have you seen Kazimir Malevich’s Black Square? If you haven’t, it’s a black square painted on a white canvas that was created in 1916 and sold for $60 million dollars in 2008. I don’t see a difference—other than one is physical and one is digital.

If you’re thinking about investing in NFTs, you should be doing so because you believe in the power of the technology of NFTs, followed by if you think that particular NFT is a good investment. Let’s deep dive into this more. 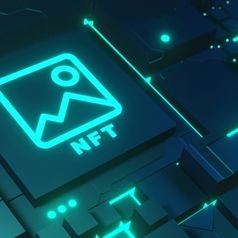 If you want to invest in NFT digital art or collectibles, you should do so because you love the piece. Sure, you might be one of the lucky few who makes millions, but let’s be real. That’s not likely to happen.

Purchasing an NFT art piece is no different than purchasing a physical work of art. It only gets high monetary value because people give it value.

Jay-Z purchased a CryptoPunk and set it as his profile picture. Why? Because it’s a status symbol. It’s no different than you putting on that Rolex. Is a Rolex honestly that much better than any other type of watch? No, it is not. But we’ve given it value. Digital artwork is no different.

Although we tend to think of NFTs in the form of digital art and gaming characters, I think the true value of NFTs is the transaction potential.

Read More: What Are NFTs and Should You Invest in Them? | White Coat Investor

Genesis Vision (GVT): Does the Reward Outweigh the Risks?