Inflation is on the minds of investors, policymakers, and everyday Americans. We can feel it at the pump, at the grocery store, the post office, and even the barbershop. Since inflation is higher than the rate of economic growth, the real gross domestic product for the first quarter of 2022 decreased by 1.4% year over year. If we get another negative reading for the second quarter, the U.S. economy will officially be in a recession.

Both Warren Buffett and Charlie Munger spoke about inflation at Berkshire Hathaway‘s (NYSE: BRK.A) (NYSE: BRK.B) annual shareholders meeting on Saturday. Here’s what they said and how they’re positioning Berkshire to ride out the storm. 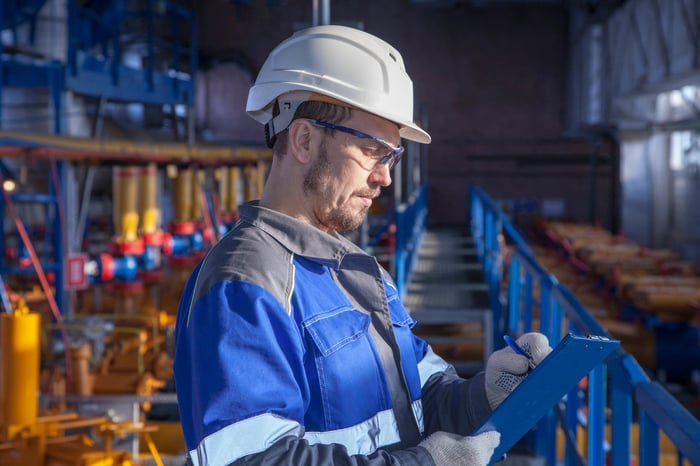 Buffett and Munger both spoke negatively about the state of the economy due to inflation and how it is largely a result of loose fiscal and monetary policy. This policy artificially inflated demand and effectively caused a supply/demand imbalance — the cure for which was rising prices to try and lower demand. And now, the remedy seems to be raising interest rates to try and reduce demand. “We are seeing an unleashing of the fact that we just mailed a lot of money one way or another,” said Buffett.

However, Buffett and Munger view inflation as a necessary consequence to get the U.S. out of what could have been a COVID-19 induced depression.

“We’ve had a lot of inflation, and it was almost impossible not to have it if you’re going give out the kind of money we gave out. And it’s probably a good thing we did it, in fact, I think at one point when the Federal Reserve was creating the money, if they hadn’t done it our lives would be worse, a whole lot worse. Now that was an important decision,” said Buffett.

In another exchange, Munger said, “It happened on a scale this time that we’ve never seen before. Those checks are just mailed out to everybody who claimed to have a business and claimed to have employees. They probably drowned the country in money for a while, and as you [Buffett] say, they probably had to do it.”

“In my book, Jay Powell is a hero,” Buffett responded. “It’s very simple, he did what he had to do.”

One way of growing wealth during inflationary times is looking for opportunities that aren’t otherwise available. The trick is having plenty of experience looking for those opportunities in other economic conditions, too. “We depend on mispriced businesses through mechanisms where we aren’t responsible for the mispricing of them,” Buffett said.

Buffett surprised investors when he disclosed a roughly 9.5% stake in Activision Blizzard. The stake is worth about $6.2 billion as of Friday’s close. Buffett owned about $1 billion of Activision before Microsoft announced it would acquire it for $95 a share. Buffett then increased Berkshire’s position as a classic arbitrage opportunity under the assumption that Microsoft is a reliable buyer and would come through on the deal. That arbitrage opportunity is sizable, considering Activision Blizzard’s stock is currently $75.60 per share.

Buffet’s Activision Blizzard play is merely an old-school way of finding value in a challenging market. However, regular investors should probably steer clear of these kinds of investments, as the deal isn’t based on fundamentals and could fall through. You don’t want to end up owning a company you don’t understand and didn’t really want in the first place.

So what can you do?

It’s all good and well to say that inflation is unavoidable. But the real question many investors are probably wondering about is how to position their portfolios for prolonged inflation.

First off, it’s important to remember that economic cycles are simply par for the course in a long investing career. Whether inflation is the cause of a sell-off or not is secondary. The bigger takeaway is that a bear market can create life-changing wealth for investors in companies with bright futures, positive cash flows, and durable balance sheets.

What Berkshire is showing through its actions is an increased buying appetite that we haven’t seen in years, which indicates Berkshire is finding value — mainly in the energy sector. In less than a year, oil and gas went from a minor allocation to a major one. Berkshire’s Chevron holding has pole-vaulted to its third-largest position, while Occidental Petroleum has been a top 10 holding since Berkshire increased its stake in February and March. Berkshire also took a stake in HP this year, and its acquisition of insurer Alleghany shows its classic value stock bent.

Chevron is known for its industry-leading balance sheet and a low cost of production that allows it to reach breakeven free cash flow even when oil is in the low $40s per barrel. Meanwhile, Occidental Petroleum is a much more aggressive spender and has a higher breakeven than Chevron. But its relatively high capital expenditures have paid off now that oil and gas prices are at eight-year highs. Meanwhile, Berkshire’s other major positions are in diversified large companies like Apple and Coca-Cola, which is one of the most recession-resistant and reliable sources of passive income on the market.

Treading carefully in a challenging market

All told, Buffett’s actions show that Berkshire is finding value in the market, more value than it has found in years. But that Berkshire isn’t just buying the dip on any company. It is selectively buying companies that are contributors to inflation (upstream producers like Occidental) or have…

Smart money is accumulating Ethereum even as traders warn of a drop to $2.4K