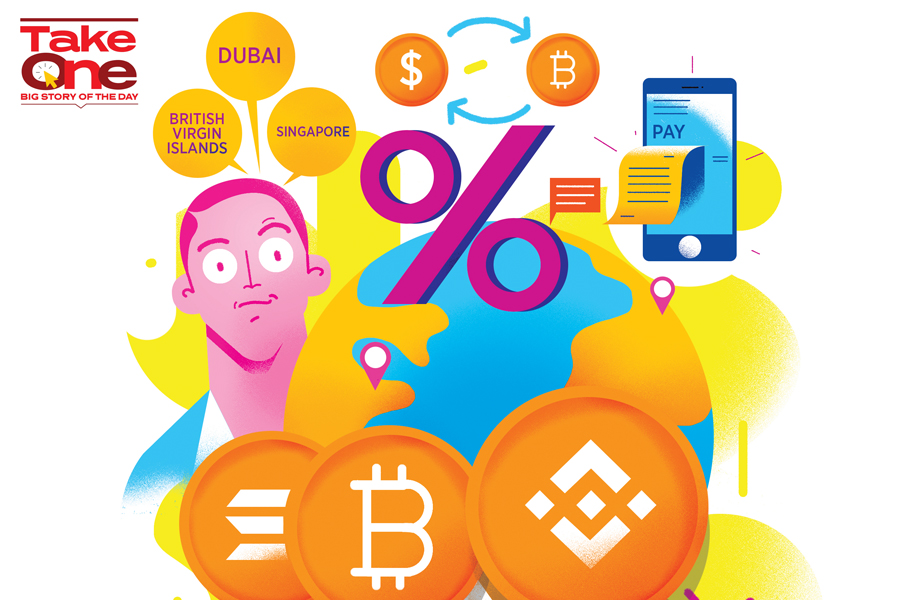 Spot trading volumes for most cryptocurrency exchanges in India continue to be sluggish, and in most cases about 70-80 percent off their peak levels seen earlier in 2022
Illustration: Sameer Pawar

Conrad Dias, 30, has been investing in cryptocurrency for the past one year. Initially, he started trading on Indian exchanges WazirX and CoinSwitch Kuber but after facing constant glitches, Dias switched to Binance, a Cayman Islands-registered international cryptocurrency exchange. “Indian exchanges used to crash ever so often when there was increased market volatility. I opened an account with Binance Pro and it has been much better since,” says the media professional.

Dias, a regular investor into mutual funds and equities, opted to be riskier and “see if cryptos were really profitable”. With 20 percent of his portfolio invested in cryptocurrency, Dias is currently trading through the peer-to-peer (P2P) route at the exchange.

Dias will need to be resilient if he wants to continue to trade and emerge profitable in virtual digital assets (VDA). Regulations are still to be ironed out and the taxation is steep. The start of the new financial year has only caused discomfort for retail investors in India, with the implementation of a 30 percent capital gains tax on income from cryptos, since April.
Add to this another controversial provision, a one percent tax deducted at source (TDS), which will be implemented from July this year. The government, in March-end, has also clarified that investors cannot set off losses incurred from one VDA with the profits from another VDA transaction while computing taxes. But the same is allowed for investments in other assets such as stocks and commodities. The government has thus sent the signal that a crypto investor cannot dodge paying the 30 percent tax, if they have made a profit.

Spot trading volumes for most cryptocurrency exchanges in India continue to be sluggish, and in most cases about 70-80 percent off their peak levels seen earlier in 2022, as per data from Crebaco Global, a crypto and blockchain market research and ratings firm. This trend is further corroborated by a sharp fall in total online visitors to several domestic cryptocurrency websites. 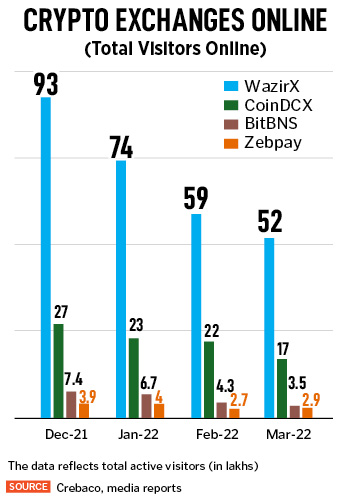 Cryptocurrency exchange ZebPay CEO Avinash Shekhar says: “While we have seen a reduction in overall trade volumes due to the adverse impact of the new tax laws on day-trading, we continue to see investors buying into crypto as an asset class. There is still a strong belief in crypto as a mid –to-long-term investment avenue and this doesn’t seem to have changed in any way.” ZebPay is seen as one of the pioneers in India’s crypto space since 2014.

Sidharth Sogani, founder and CEO of Crebaco Global believes trading volumes will “go sideways” because new entrants are not coming in.

The decentralised nature of cryptocurrencies has meant that prices of several of these coins, globally and in India, continue to be extremely volatile in 2022. Bitcoin is down about 18.3 percent year-to-date, Ethereum about 23 percent, USDT is up about 2.3 percent and Ripple is down about 20 percent in 2022.

The sluggish trend in trading volumes will continue because tax and compliances are too high and not very supportive. Sogani particularly points out to the restriction in setting off losses. “This reduces the exposure of investors to newer projects, to more diversified portfolios. The sluggish trend will continue, there will be only long-term investors. “

An avid crypto investor, Kushal Parikh says the impact of crypto tax regulations will vary based on how one is involved in the space. “For an investor like me with no immediate plans to sell, it doesn’t really change much. On the other hand, traders and Web3 businesses will certainly be impacted due to the provisions of no set off of losses and TDS,” he says. “I understand the government’s intention to track crypto transactions and bring them under the tax net, but we need to adopt a more pragmatic approach, so that we don’t inadvertently kill off a nascent industry with great potential. The positive is that when other industries have gone to the government with their challenges, the government has shown a willingness to listen and resolve these challenges.”

Crypto entrepreneur and investor and former CEO at ZebPay, Ajeet Khurana, argues that the one percent TDS is “extremely high” and should actually have been closer to 0.1 percent.  A higher tax, experts argue, reduces income tax collections as investors will not have the ability to invest higher amounts towards crypto trading, generate income and pay tax on it. “One should collect only what is fair,” Khurana says.

With the TDS emerging as a huge pain point for the industry, the government has said that in coming months it will provide procedural clarity on this issue.

Retail crypto investors, such as Dias, are not unique in taking tough trading calls in an uncertain ecosystem. Crypto trading got a jolt in April when US-based Coinbase suspended the Unified Payments Interface (UPI) platform for its users, just days after it announced the plan to launch cryptocurrency trading in India.

Coinbase got spooked after the National Payments Corporation of India (NPCI), which runs the UPI interface, made a public statement on April 7—disassociating itself from Coinbase—by saying that it was “not aware of any crypto exchange using UPI”.

This had a cascading effect and was followed by fintech giant MobiKwik’s decision to suspend its support for crypto transactions through UPI. Banks have since misinterpreted these developments to believe that the NPCI does not support crypto trading (which the NPCI has not said).

Coinbase is an investor in two of India’s leading crypto exchanges, CoinSwitch Kuber and CoinDCX.

Several banks have since—once again—declined to offer support to allow crypto transactions through their platforms, though bank transfers into a wallet (if it is so allowed) and IMPS or NEFT transfers to buy or sell cryptos are still allowed by some exchanges. Prior to this, the UPI was a widely-used method to carry out crypto trades. According to a CLSA report, UPI comprises 60 percent of the total payments by volume in India, and digital payments have risen to $300 billion in FY21 from $61 billion in FY16.

MobiKwik, the NPCI and Coinbase declined to respond to emails from Forbes India regarding the recent controversy. At least six banks have also declined to speak about the matter. Forbes India, however, has learnt through sources that some banks are in private chats with the NPCI to resolve issues and understand concerns of support to the trade.

In May 2021, trading and investing in cryptocurrencies through mobile apps and on crypto exchanges became difficult after some financial institutions, including most banks and NBFCs, were reluctant in supporting crypto banking transactions. The matter was resolved when the Reserve Bank of India (RBI) on May 31, 2021, said its 2018 circular (prohibiting banks from dealing in virtual currencies) was no longer valid, as it had been quashed by the Supreme Court in March 2020.

The embarrassment for Coinbase in 2022 was due to events just prior to its April 7 India launch announcement. Coinbase CEO Brian Armstrong and his top management were in Delhi and met top officials from government think-tank Niti Aayog and IT industry body Nasscom.

Discussions and presentations were centered on demonetisation and how India had created the ‘digital rupee’ in the form of a vastly successful UPI platform. This probably got the Coinbase team to believe that they should need to talk about NPCI and UPI at their Bengaluru launch—which they did —to make their India business plan appear genuine. This did not help and NCPI backed off. This time, the RBI also chose to steer clear of the NPCI views.

Branding consultant and crypto investor Sidhant Sidana, 27, is not happy about the freeze on UPI transactions. As an alternative, he uses the P2P USDT (US Dollar Tether, a blockchain based cryptocurrency) purchasing method but is not too convinced about it. “UPI/net banking fills up the crypto wallet with rupees instantly so I prefer it. P2P is not spontaneous; it could take a few minutes, or hours or even days depending on your bid per USDT. However, the P2P process is simple,” Sidana says. He has been investing in crypto through WazirX for almost two years now, now constituting more than a third of his total portfolio.

On the other hand, the UPI non-support does not affect Jai Bahal, a crypto investor who is also the founder of blockchain-based gaming company Coincade Studios. “There are several ways to buy crypto,” says Bahal, who trades on CoinSwitch Kuber, WazirX and international exchanges such as Binance, and decentralised crypto exchanges such as Pancake Swap, Uniswap, Transak and wallets such as MetaMask to trade and swap.

ZebPay currently allows deposits and withdrawals through three payment modes: Instant deposit, net banking and manual transfer. “We do not offer UPI services on our platform at this time. Users can still deposit and withdraw funds through existing payment modes. ZebPay’s platform functionality continues to allow users to trade as earlier,” the exchange says.

P2P is now the favoured method—besides instant deposits and manual transfers through IMPS or NEFTs—for retail investors to buy or sell cryptos at some of India’s crypto exchanges, including WazirX.

P2P transactions work on bidding methodology, where one (a buyer) can bid a certain amount in rupees at the prevalent rate. If the other person (the…

Best Crypto Exchange in Singapore for May 2022