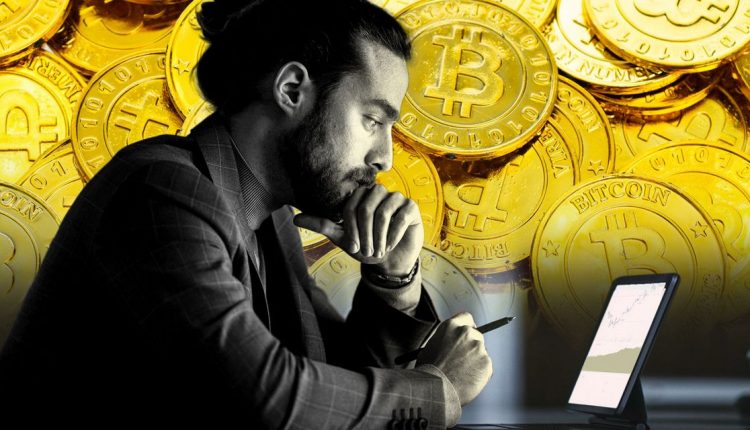 It started a cryptocurrency investing opportunity that slid into George Kissi’s direct messages in late April.

It’s ending with a bitcoin loss of almost $20,000 that the self-declared “risk taker” from Dublin, Ohio calls “a total scam.”

“I don’t know why I fell for that, other than greed,” Kissi, 49, told MarketWatch. When you have your eye on the prize and want everything now, he said, “That’s when you get scammed.”

What happened to Kissi is a cautionary tale that’s becoming common and costly, according to regulators. Some people are luckier than others in avoiding scams, but Kissi made mistakes in his attempts to make money and learned a lot of lessons too.

Perhaps the most salient lesson in light of the current crypto crash: Losing a large chunk of your investments can be a stressful and emotionally taxing experience. As such, the promise of a big payday in such a volatile market can prove too tempting to resist.

Crypto con artists scammed Americans out of $1 billion since last year, with median reported losses of $2,600, according to the Federal Trade Commission. A common snare is the purported promise of “huge returns,” the agency said.

The question is how to stop it, as federal lawmakers come up with proposed bipartisan legislation aiming to put cryptocurrency under more government supervision.

But as crypto investments keep hemorrhaging value during the latest downturn in the market, the question is also whether market conditions will turn more investors into the targets of scammers preying on people trying to recoup loses.

“It’s difficult to predict exactly how the current bear market will impact illicit activity vulnerabilities across crypto investments, especially given that an individual’s response to market strain can vary widely,” said Kim Grauer, director of research at Chainalysis, a cryptocurrency analytics firm working with government agencies, exchanges, financial institutions, and other clients.

For now, Grauer has not seen an increase of scamming across assets. “Anecdotally, we have heard that some people may lose money to scams because the high-risk stakes of these investment offerings are appealing,” Grauer said.

“Some people may invest in many investment opportunities with the expectation that most of them will fail, but a few might pay off. However, scammers also often target the most vulnerable, including the elderly,” he said.

Kissi has been day trading cryptocurrencies since 2017, and at the heart of his strategy is swapping coins to pocket returns. Kissi said he made $100,000 through his handiwork last year — as for this year, he’s holding his breath.

Kissi has seen the asset’s valleys, its peaks and its perils. It’s just turned him more bullish on crypto.

Months into the investing ride, he logged onto an exchange and learned that particular exchange was not allowed to operate in the United States. On that occasion, he lost around $1,000 in coin holdings dogecoin
DOGEUSD,
,
according to Kissi. (The lesson: Always check the provenance of the exchange before signing up, and beware of too-good-to-be-true social-media advertisements.)

Other scams began with technical glitches Kissi encountered with some of his coins around a year ago. Kissi asked for help in a chat room and someone claiming to be of assistance got access to Kissi’s digital wallet and “just completely wiped me out.” (The lesson: Don’t give strangers in a chat room access to your wallet.)

Kissi does his own research, which includes listening in and participating in various online forums.

In late April, Kissi received a direct message to his Telegram account from a person he didn’t know. Kissi asked if they knew each other and the person replied, “So sorry, actually we share the same mutual group chat,” according to a screenshot reviewed by MarketWatch.

The person gave Kissi a heads up on an outfit. One email to this site requesting comment went through with no reply. Two follow up emails bounced back.

Wording on a cached version of the website — which is no longer operational — said the entity was a “U.K.-registered online digital-asset company.” It offered a “wide range of sustainable finances that integrates the most efficient Human-Centered Artificial intelligence to infuse cognitive fiat-cryptocurrency trading and financial services by analyzing millions of data points and execute trades at the optimal price.”

For $10,050 paid in Bitcoin, the return could be 19% in six days, according to screenshots Kissi provided. “Let’s give it a shot, because nothing ventured, nothing gained,” he figured, adding that double-digit gains are not unheard in this market. (The lesson: There is no such thing as guaranteed returns, and beware of sites that make such attractive promises.)

Kissi doesn’t flinch from risk. He was once a broker selling life and health insurance — industries built on the idea of odds, risks and rewards, Kissi notes. When it comes to investing, Kissi says he’s either all in, or he’s out. “There’s no in between with me.”

Even more so, Kissi emphasized he parted with crypto holdings he could afford to see vanish. “Always invest what you can afford to lose,” he said.

So Kissi made the bitcoin payment, gave it couple days and then sought a withdrawal. But Kissi’s returns appeared to be expanding so much, he was required to pay a higher fee, the site emailed him.

Even though Kissi suspected something was amiss, he made a last, desperate attempt to hold onto the belief that he had not just thrown his money away.supplied another $4,250 in mid-May. (The lesson: Don’t click on random links given to you by strangers on the internet.)

Over the next several days, Kissi began submitting complaints to authorities, including the  Federal Trade Commission and the Ohio Attorney General’s office. Nevertheless, Kissi tried one more time to withdraw what he sunk in and paid another $5,050 in bitcoin in early June.

Why? Even Kissi’s friends told him not to do it, he recalled. “There was still a little part of me that said, ‘Maybe,’” Kissi said. Also, a scam might still at least pay out to one victim as it tried to operate by pulling in another, he said.

“Once you have bought into a con, much like a toxic relationship it can be difficult to extricate yourself from it.”

The FTC report on crypto scams echo Kissi’s experience. When victims “really try to cash out, they’re told to send more crypto for (fake) fees, and they don’t get any of their money back,” FTC researchers said.

(The lesson: Once you have bought into a con and made a decision to trust a source, much like a toxic relationship it can be difficult to extricate yourself from it.)

Kissi is resigned to never seeing the coins or his investment again. But he’s unapologetic about his decisions — particularly at a time when he hears from friends and relatives who complain about the losses in their 401(k) accounts. “There’s no safe haven anywhere,” Kissi said.

Of course, the key difference is 401(k) losses are paper losses, and history has shown — as it did in 2020 — that those losses are recoverable given time. Crypto, as a relatively new phenomenon, is more unpredictable. And losses to scam artists and rogue sites are, more often than not, gone forever.

2 crypto VCs and an angel investor at NFT.NYC break down what they’re looking for in