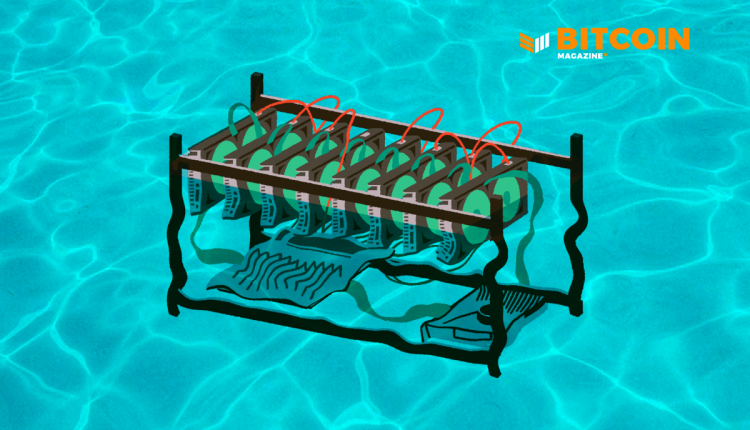 Air is passé and dielectric liquids are en vogue as the number of bitcoin miners building immersion cooling systems has grown rapidly in the past two years, with no signs of this trend losing pace.

With mining difficulty consistently increasing, bitcoin’s hash rate continues setting new record highs and the dollar-denominated revenue produced by a single machine is decreasing. As a result, every mining unit is looking for competitive advantages over their counterparts, and more miners than ever think immersion is an answer.

Beyond explaining the what and why of immersion cooling, this article details some of the miners — big and small — that are betting on immersion as the future of Bitcoin infrastructure. The economics of immersion are also thought to provide an answer to the question: Is immersion worth it?

What Is Immersion Bitcoin Mining?

Immersion mining — or mining with immersion cooling systems — is the practice of submerging bitcoin mining equipment in dielectric fluids — either oils or engineered fluids — with the goals of managing heat exhaust, limiting noise, increasing production and more. The process of building and submerging a mining machine in an immersion cooling system is self-evidently more complex than setting the same machine on a rack with good air circulation. But the core function is cooling hash boards as the fluid that runs over them is circulated, piped in and then out of the tank.

After being submerged in a tank filled with fluids, a mining machine’s operations differ widely from an air-cooled machine sitting on a rack. Cleaning for dirt and dust is unnecessary. Fans are removed from the hardware. Normal noise levels (around 80 decibels for an air-cooled machine) drop significantly. And miners can more safely overclock a machine.

Specialized bitcoin mining computing hardware is barely one decade old, first introduced in late 2012, but immersion cooling systems are not a new technology. The modern form of immersion-cooled computing hardware was pioneered by Hardcore Computer and Green Revolution Cooling several years after the turn of the century. But several patents and innovative milestones for early forms of these systems were recorded throughout the 19th and 20th centuries.

With lots of capital, lots of hash rate and a high-profile market presence, publicly-traded bitcoin mining companies represent a significant part of the recent trend leaning into immersion cooling. For example, Riot Blockchain, one of the largest public miners, announced a massive 1 gigawatt mining facility planned for Navarro County, Texas that includes at least four buildings dedicated to immersion mining in addition to the immersion-cooled systems that the company already operates at its Whinstone, Texas facility. CleanSpark also announced its plans for a 20 megawatt (MW) immersion-cooled facility in Norcross, Georgia. And Argo Blockchain plans to deploy 200 MW worth of immersion-cooled mining hardware, per public filings.

Not every large, public mining company needs to build immersion-cooled facilities though. In fact, some facilities don’t even need an air-cooling system. In some Bitfarms-owned mining farms operating in Quebec, for example, the outside air is so cold due to the local climate that it naturally counteracts the heat exhaust from the mining machines.

Speaking at the Bitcoin 2022 conference, Core Scientific’s CEO said that, for immersion setups, efficiency is increasing, and costs are dropping. “It’s a lot less expensive to build an immersion facility than it was a few years ago,” he told the audience.

Large institutional miners aren’t the only ones who increasingly favor immersion to air-cooled systems. Immersion is also popular with small-scale, at-home miners that are installing a wide range of immersion systems, from professionally-fabricated units to do-it-yourself experimental projects.

Twitter is saturated with photo and video documentation of creative at-home immersion cooled setups. Arizona-based miner Gian Mendoza, for example, shared photos of a 10-gallon fish tank with 6.5 gallons of mineral oil cooling an Antminer S9. A member of the Start9 Labs team shared another at-home immersion setup built in a fish take.

Telegram is also home to lots of immersion-focused mining chatter by retail miners. The home mining industry’s leading chat room, called Home Mining Wizards, has records of hundreds of messages about immersion. Compared to running a fan, immersion cooling is more complex and possibly intimidating for many novice miners. But thanks to social media and online guides, these communities are actively troubleshooting and building their own liquid-cooled mining operations.

Is Immersion Cooling Your Bitcoin Miners Worth It?

Lots of miners are bullish on mining and building for it, from gigawatt-sized industrial facilities to fish tanks at home. But one of the key critiques to immersion-cooled mining operations is the capital and operational expenses incurred to build and maintain this type of setup. Breaking down the benefits and economics of immersion cooling helps answer this objection.

Benefits to miners from immersing their hardware are numerous, and some of these advantages have been mentioned previously in this article. Liquid cooling offers improved heat dissipation, making the absorption and removal of heat much more rapid compared to air cooling. With improved heat control, machines can also be more safely overclocked, meaning the machines are hashing at higher-than-normal levels, which leads to greater revenue earned. Efficiency also improves with immersion thanks to removing the fan, which accounts for nearly 5% of the machine’s total energy consumption. Without the fan, this energy can be spent on hashing instead. When a machine is submerged, its general operating conditions also improve, as cleaning and general maintenance needs are significantly reduced. But all of these benefits come from a higher up-front cost, which is simply not worth it for some miners.

Two basic considerations for immersion builds include initial costs and long-term profitability. Immersion miners need finances for all the same components as air-cooled sites while also filling a list of additional and often costly components, including tanks and frames, pumps, heat exchangers, sensors and control systems, and dielectric coolant. It’s nearly impossible to calculate an absolute and narrow price range for building mining infrastructure, but new analysis published by Braiins Mining finds that extra capital expenditures incurred by immersion cooling setups are shockingly similar to costs of an air-cooled facility, since the lion’s share of costs for both types of operations come from construction labor and electrical equipment.

Like building costs, factors that determine a miner’s profitability are also highly variable. But analysis from Braiins also concludes that, out of several versions of air- and immersion-cooled setups, the scenario that performs exceptionally well is an immersion-cooled installation with custom mining firmware at 4,000-watt power consumption. Included in the analysis are several mining profitability projections with bullish and bearish market outlooks to give prospective immersion miners a wide range of possible profit projections.

In short, the advantages of immersion are clear, the costs are comparable even if slightly higher than air cooling, and multiple scenarios should be considered to determine how to operate most profitably.

You Could Give Immersion Cooling A Try

The trend toward immersion in the mining industry is strong and growing stronger, both for institutional and at-home miners. Even though the details can seem intimidating for a novice retail miner with no technical background, anyone can fairly easily run an Antminer S9 in a mineral-oil-filled fish tank with custom firmware (e.g., Braiins OS+) for a successful at-home immersion operation.

And there are large, active online communities of other miners eager to share advice and instructions. Even though this article is by no means an exhaustive introduction to immersion-cooled mining, it explains the growth of this trend among bitcoin miners and overviews some of the basic costs and economic modeling required to successfully operate a liquid-cooled mining setup. Air-cooled farms won’t be rendered obsolete, but a future where the majority of Bitcoin’s hash rate comes from immersed hardware could be closer than anyone expects.

This is a guest post by Zack Voell. Opinions expressed are entirely their own and do not necessarily reflect those of BTC Inc or Bitcoin Magazine.


Read More: Immersion Cooling Is Trendy, But Will Bitcoin Miners Take A Bath?

Ethereum Rival Tumbles As Hackers Drain About $100,000,000 From Its Crypto Bridge – The